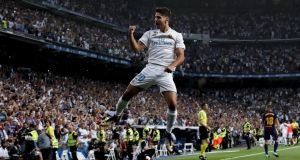 The second leg of the Spanish Super Cup was only four minutes old when a smile stretched across Zinedine Zidane’s face. Real Madrid had just taken the lead, Marco Asensio’s wonderful 35-yard effort dipping past Marc-Andre Ter Stegen but Zidane did not leap into the air, clench his fists or scream; it was just that smile, appearing easily, almost gently, as if he was not just enjoying it – he had expected it. Already 1-0 on the night, it was 4-1 on aggregate and his team were on course to win the seventh title they have collected in only 18 months under him.

By the end, it was 2-0, 5-1 on aggregate, after Karim Benzema added a second past the half-hour. Madrid had the victory, the title and the promise of more, too. Past 1am they paraded the trophy and if the silverware was something to celebrate, the sense of security was another. Such a contrast to Barcelona, who stood and watched them collect it, well beaten. Maybe that had been expressed best in Zidane’s smile. The opening goal had the ingredients to be a surprise but did not feel like one, somehow.

The shot was superb, hit by a 21-year-old to open the scoring in a clasico. But, then, Asensio is a 21-year old-who had already scored a sensational goal at the Camp Nou last week; another debut strike for the player who had scored on his club debut, his league debut, his cup debut, and his Champions League debut. And in the Champions League final, too – his first on that stage but, on the evidence so far, not unlikely to be his last.

He departed to a deserved standing ovation with 15 minutes to go. His claim on a first-team place is strong, a clear threat to Gareth Bale. It is early, sure, but Asensio is a special talent and this team will take some stopping.

Here, Barcelona could not. It was not only that Madrid were on their way to victory over their greatest rivals; it was the way they were doing it; the way this early lead could not even be considered unexpected: Asensio had already provided a chance for Luka Modric after 75 seconds. Now he had given them the lead. Soon he was drawing roars from the Bernabeu for a neat backheel. There would be more.

Madrid were in control, the touch superb, comfortable when they had the ball and quick to recover it when they did not. There was no Bale, no Cristiano Ronaldo either – the former was on the bench, the latter suspended for five games after pushing the referee in the first leg – but it did not matter. Casemiro was on the bench, too, but in his place Mateo Kovacic was magnificent. The strength in depth reinforced, still, the conviction that the lead Madrid have over their rivals right now is profound.

Momentarily, Barcelona worked their way into the game, one neat run from Lionel Messi leaving him in front of Keylor Navas yet unable to pull the ball from his grasp. Yet this was Messi and little else. If he came deep, it was because he had to. He fought a losing battle alone. Barcelona looked like a side falling apart: slow, suffocated, disorganised and lacking belief, overrun and barely able to find their way out. Lacking an idea or an identity, too.

Off the pitch, crisis looms; results and performances such as this will only hasten its arrival. Madrid pushed them towards the precipice. Their reaction was timid and lasted barely 10 minutes. Marcelo and Asenio ran beyond them, Toni Kroos, Kovacic and Modric played, Benzema linked it all up and at the back Madrid were mostly untroubled, the full backs flying forward. There were chances, and moments to be enjoyed, the ball moved fast across the pitch, Barcelona’s players usually arriving late if they arrived at all.

Dani Carvajal nutmegged Luis Suarez, a moment later Modric flicked over Andre Gomes’s head. And in the midst of it all, the olés still ringing round, the home fans laughing at it all, enjoying the sense of humiliation they imagined their opponents felt, Marcelo found Benzema to score the second. It had started with Sergio Busquets again caught, the passing avenues that were this team’s lifeblood shut down. They departed to a standing ovation at half-time.

Barcelona made chances in the second period but the game was gone, the title even more so. Messi hit the bar; Suarez had one blocked, another saved and nodded wide at the far post. When Navas pushed away a Messi shot, he skidded in and stooped to head the bouncing ball against the near post. Then Samuel Umtiti had an effort blocked. All that came in quarter of an hour but it was Madrid’s fans who were enjoying this. They knew they would win; they had done since the fourth minute.

1 Ireland suffer Twickenham torture yet again as England dominate
2 England 24 Ireland 12: How the Irish players rated at Twickenham
3 Eddie Jones’s comments have already provided Irish team-talk for 2021
4 TV View: Sunday Bloody Sunday . . . Not Bono’s fault but Boy, that was Bad
5 England held all the aces in defining battle of the breakdown
Real news has value SUBSCRIBE
Crossword Get access to over 6,000 interactive crosswords