Conor Hourihane stays focused on goal with Republic of Ireland 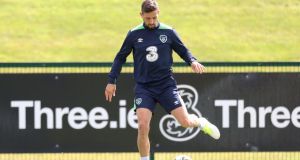 Ireland's Conor Hourihane in training ahead of the 2018 World Cup qualifiers with Georgia and Serbia. Photo: Inpho

At 26, Conor Hourihane might be said to have taken a slightly scenic route to this point in his career but the Corkman is quietly determined that the journey still has a few good miles left to run.

The midfielder started out as a teenager at Sunderland when Roy Keane was the manager and followed the former Ireland captain to midfield to Ipswich where, he admits, he expected to make a bit of a breakthrough. Instead, he was forced to drop down the divisions in search of first team football which he eventually started to get at league Two club Plymouth.

The club was in crisis and there were times when the players went without their pay but Hourihane was, he says, just happy to get the opportunity to play. Within a couple of of years he was the club captain and though he subsequently achieved much greater prominence at Barnsley, the sense is that he still regards those three years at Home Park as a formative stage in his development.

“I dropped down a few leagues and went from a boy to a man very quickly,” he says. “You get tough games on Tuesday nights in cold weather and in poor conditions so you learn quickly and you’re grateful for the clubs that you are at now.

“It was a tough time,” he continues. “It was probably a case of sink or swim at Plymouth. But I knuckled down, really worked hard and it’s paid off.”

“In the last three or four years I usually hit double figures, which is my aim every season. Last year I got seven but that was disappointing, being honest. I’ve got four early now in the season so I’ll be looking for double figures again.

“There’s been a big thing about the midfielders at Villa for the last maybe five or six years not getting enough goals. Maybe one of the reasons I got offered the chance to go to the club was for that reason. So to get four so early in the season is pleasing.”

It has certainly, he says, helped with his confidence as he looks to push on from his first two games for Ireland which, he suggests, were both disappointing in terms of his performance.

“The first game (against Iceland), obviously I was very nervous. It’s always a dream to play for Ireland but maybe my nerves took over a little bit. Second game against Mexico was obviously tough. They are very good technically . . .”

“I’ve been in the last three squads, though, and I’m looking to establish myself there. The goals are an important thing in my game; they get you headlines and get you going. It makes you stand out from the crowd a little bit so maybe that’s something that I can bring to the international setup.”

They should stand to him alright as O’Neill weighs up his options and looks to his midfield to chip in with a few more. He may be helped too by a relationship with Roy Keane that survived the player’s early frustrations at club level.

“Listen, I was 18, 19 and had no first team football in me. I was probably thinking at the time ‘why was I not getting in’ but, looking back, I can see why I wasn’t playing.

Playoffs set to be moved again as Uefa prioritise European club competitions 15:59
Harrington would prefer 12 picks over delayed Ryder Cup 09:06
Australian rugby staring into abyss as another crisis hits 09:03
Ringrose set for new central deal; memories of Björn Borg at Wimbledon 06:51
Seán Moran: What nostalgia tells us about how the GAA sees itself 09:05

1 ‘For 25 minutes I ran out of oxygen’: Pepe Reina on his coronavirus battle
2 Garry Ringrose to stay with Leinster as he signs two-year central contract
3 Australian rugby staring into abyss as another crisis hits
4 Dr Claire Molloy: ‘It is a privileged place to be, on the frontline’
5 Playoffs set to be moved again as Uefa prioritise European club competitions
Real news has value SUBSCRIBE
Crossword Get access to over 6,000 interactive crosswords