Thiago saddened by abuse of Pique at Spain’s training session 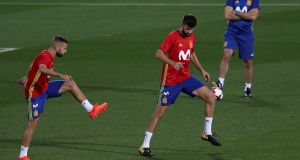 Thiago Alcantara was saddened by Spain fans abusing Gerard Pique at an open training session on Monday night, but said the Barcelona defender was unaffected by the incident.

Pique voted in the illegal independence referendum in Catalonia and criticised the Spanish government for trying to shut it down violently, angering some Spain fans.

A large group of supporters jeered and insulted the Catalan centre back during a short training session at Las Rozas on Monday.

“When I’ve come [to the Spain camp] Pique has always had the same attitude, commitment and happiness,” said the Bayern Munich midfielder Thiago.

Thiago backed Pique to overcome any abuse from Spain supporters during the game.

“Pique’s already played at the Santiago Bernabeu many times. He’s used to hostile environments. He has the same attitude as always,” added Thiago, who played with Pique at Barcelona until 2013.

“I’ve enjoyed watching him as a player and having him as a team-mate and I love to be able to keep doing so.”

Spain, Group G leaders, are bidding to seal a place at next year’s World Cup in final qualifiers against Albania on Friday and Israel in Jerusalem three days later.

Atletico Madrid midfielder Koke wants to put the issue to one side and focus on confirming Spain’s presence in Russia.

“We always feel the support of the fans. Alicante loves the national team a lot and I’m sure we will feel their affection,” he said.

“The atmosphere in the dressing-room has not changed. We are focused on winning and reaching the World Cup. We’re studying our opponents, it won’t be easy to win but we can almost seal qualification.”

Striker Alvaro Morata appears to be targeting a swift return for Chelsea after being ruled out of international duty with Spain due to a hamstring injury.

The 24-year-old was substituted after 35 minutes of Chelsea’s 1-0 loss to Manchester City in the Premier League last Saturday with the injury to his left hamstring.

He was ruled out of Spain’s World Cup qualifiers with Albania and Israel after an MRI scan showed “a grade II myofascial injury in the hamstring muscles”, the Spanish Football Federation said.

Such an injury could result in a month-long absence, but Chelsea hope Morata will be available sooner. He has now reported back to the Blues’ Cobham training base for assessment and rehabilitation.

The former Real Madrid and Juventus striker on Tuesday posted a photo of himself in a Chelsea training top, with a target emoji ahead of Crystal Palace, the Blues’ next opponents on October 14.

He wrote on Twitter: “I have no time to lose! Working hard towards recovery! Crystal Palace.”

No timeframe for his recovery has been given after the scan in Madrid and he has now returned to London to work with Chelsea’s medical team.

The Blues are six points behind Premier League leaders City and their game at Palace is their first of six in 18 days.

Morata has scored seven goals since signing from Real Madrid as a direct replacement for Diego Costa, now at Atletico Madrid. His possible absence will give Michy Batshuayi an opportunity, if Conte selects the Belgian who has netted five times this season, including the winner at Atletico last week.

Batshuayi was overlooked against City as Willian was sent on as a substitute for Morata, while Conte has also spoken of using Eden Hazard as a ‘false’ nine.

A month-long absence for Morata could impact Chelsea’s Champions League hopes – two of the six games before the end of October are against Roma – but the other matches are more favourable and might be seen as an opportunity to rest Morata anyway.

As well as pointless and scoreless Palace, Chelsea face Watford and Bournemouth in the Premier League, plus Everton in the Carabao Cup fourth round.

1 Red Bull poised to protest over Mercedes’ new steering system
2 Nairo Quintana sustains suspected knee injury after being hit by car while training
3 Séamus Power rockets into share of clubhouse lead in Detroit
4 Billy Morton’s Santry Stadium a beacon for sporting endeavour
5 Monica Seles: The warrior queen who could have been the best ever
Real news has value SUBSCRIBE
Crossword Get access to over 6,000 interactive crosswords