Study into link between dementia and soccer to be launched 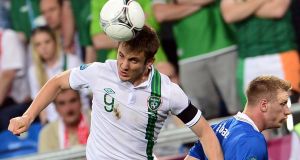 Irish forward Kevin Doyle in the Euro 2012 championships: the player has been forced to retire from the game at 34 after repeated concussions. Photograph: Giuseppe Cacace/AFP/Getty Images

The English Football Association and Professional Footballers’ Association are understood to be close to announcing the launch of a new study into a possible link between heading the ball and brain injuries.

In March, the two organisations said they would co-fund the research and set a deadline of May 17th for applications.

Those applications have now been reviewed by a team led by the FA’s head of medicine Dr Charlotte Cowie and the chosen research project should be revealed in the next few weeks.

The issue is back in the news now because former Ireland striker Kevin Doyle has been forced to retire from the game at 34 after repeated concussions.

Doyle, who won 64 caps for the Republic and played for the likes of Reading and Wolves, had been playing for the Colorado Rapids in the United States.

In a statement on his Twitter account, Doyle said “heading the ball was becoming problematic and causing repeated headaches”, and he has had two concussions this season alone, with “numerous others over the years”.

This led him to take expert advice he should quit “to avoid the possibility of these symptoms becoming more serious and permanent”.

Both the FA and the players’ union have come in for strong criticism in recent years for a perceived failure to respond to the growing signs that there is a link between heading and illnesses such as dementia.

Many former players, their families and brain-injury experts have been calling for more and better research on the issue ever since ex-England and West Brom forward Jeff Astle died from chronic traumatic encephalopathy (CTE) in 2002.

The coroner listed the cause of Astle’s death as an “industrial disease” and the subject has received even more publicity since 2002 as more cases of footballers with dementia and related illnesses have emerged.

The PFA has funded research in the past, including a long-term study of elite players led by a Leeds-based research team which started in 2001.

But the study simply took too long and its report, which did not find a causal link between playing football and brain injuries, was not published in a journal until 2016, by which time the FA, an early partner, had effectively disowned it.

Speaking to Press Association Sport in March, PFA chief executive Gordon Taylor said the new research would focus on ex-players, comparing their health to non-players of a similar age, and also look for differences based on gender, lifestyle factors, what position they played and other variables.

It is understood that both the FA and PFA have pledged six-figure sums to fund the research, with more being available if need be.

1 Serpentine stays on from the front to steal Epsom Derby for Aidan O’Brien
2 Monica Seles: The warrior queen who could have been the best ever
3 World Athletics freezes out Russian athletes after $5m fine goes unpaid
4 Eamon O’Shea: We spent quite a bit of time talking about older people rather than to them
5 Séamus Power huffs and puffs as Wolff blows the door down in Detroit
Real news has value SUBSCRIBE
Crossword Get access to over 6,000 interactive crosswords