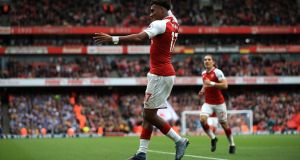 The Wenger Out Brigade scare easily but they’ll be back. And in greater numbers. For now, it is a time for Arsenal to enjoy a period of tranquillity and, yes, positivity. To continue the Star Wars theme, the force is with them, at present.

Arsène Wenger is only ever one bad result from hearing the yells for his head but that never felt likely here, with his team in control from the first whistle. But for some heroic defending from Irish international Shane Duffy and Lewis Dunk, the scoreline could have been heavier for Chris Hughton and Brighton & Hove Albion.

Wenger rarely fluffs his lines against newly promoted teams. The last such club to win at the Emirates Stadium was Newcastle United in 2010 – who were then managed by Hughton – and Arsenal coasted to victory on the back of a rare goal from Nacho Monreal and a second-half strike by Alex Iwobi.

Brighton looked tidy enough and they finished with their heads up. The substitute Glenn Murray flashed a late header just past the near post, which would have given their magnificent travelling support something to really shout about. But they never carried enough of a threat to make the game competitive.

When Arsenal headed for the last international break, at the end of August, their heads were ringing after the 4-0 defeat at Liverpool and there was uncertainty over several players in the final days of the transfer window. This time, they can reflect on a run of three wins and a draw in the Premier League – with clean sheets in each game.

It was one of those afternoons when the home fans rolled out of bed, yawned and sat back in the expectation of a win. All the noise came from the Brighton hoards. Those in red were not inclined to extend themselves. They did not have long to wait for the opening goal.

It followed concerted Arsenal pressure and a bout of pinball inside the Brighton penalty area, after Alexandre Lacazette had headed back Granit Xhaka’s free-kick from the byline beyond the far post. Brighton argued that the ball had crossed the line. They were wrong.

Shkodran Mustafi was the first to take a swipe and his shot was hacked off the line by Duffy. Héctor Bellerín then had an effort blocked and, when it spun up to Monreal, he controlled smartly on his chest and lashed home a low shot.

Arsenal were comfortable, even if Brighton had a few flickers during the first half, none more eye-catching than the beautifully worked free-kick routine that finished with Solly March thumping in a left-footed shot from 20 yards that beat Petr Cech only to clatter into the upright.

There was also the moment on 41 minutes when Cech flapped at a Pascal Gross corner, although Arsenal scrambled clear and broke at pace through Alexis Sánchez. Bellerín played in the overlapping Sead Kolasinac and he crossed low for Aaron Ramsey, who looked odds-on to score. Mathew Ryan, who was going the wrong way, stuck out a leg to keep out his shot. It was an excellent stop.

Hughton had set up Brighton in a 4-5-1 formation and he wanted to keep the space in between the lines to a minimum. As usual, the watchword for him was discipline. Goals have been a problem for Brighton and Hughton wanted to stay in the game for as long as possible. The approach did not become any more expansive after Monreal’s early goal.

Lacazette looked dangerous, all explosive movement in the final third and slick technique. He hit the post in the second minute with a right-footed pop from outside the area, which had Ryan beaten, while he burst through on 33 minutes but his finish was surprisingly weak. It ended up being a routine save for Ryan.

Iwobi started in the continuing absence of Mesut Özil, who has an problem with his knee, and he made the points safe early in the second half. For the umpteenth time Arsenal probed on the edge of the Brighton area, with Ramsey ever eager to make the run beyond the final defender.

He gave the ball to Sánchez and went for the return, with the Chilean manipulating a cute back-heel that looked to be intended for him. It ran through, instead, for Iwobi and he planted his finish high past Ryan. Iwobi had previously been denied by the Brighton goalkeeper in the 13th minute. His performance deserved the gloss of a goal.

Sánchez tried everything to score but the closest he came was when he jinked inside on the hour and shot low. Ryan was beaten but the covering Dunk swung a boot at the ball, got something on it and watched it squirm inches past the far post. Kolasinac had a header from a corner cleared off the line by March while Dunk denied Lacazette with a saving tackle.

Tuilagi case shows England’s home-based clause is out of date 16:48
Cam Newton broke the mould: Can his flame be rekindled at the Patriots? 12:12
Pete Sampras: The forgotten great with the best serve in the business 11:10
Simmons: England West Indies series a blueprint for cricket 10:17
Different Strokes: Frankie leaves Fleetwood for Hollywood 10:00