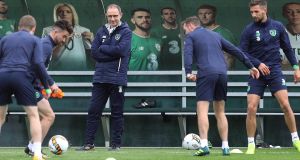 Film reviewers are calling Blade Runner 2049 the hallucinogenic experience of the year but it seems safe to assume none of them has spent the length of that movie poring over the permutations in the last two round of World Cup qualifying games. They are, in short, quite complicated.

The Republic of Ireland, we know, are scrapping for second place in Group D in the hope of securing a place in the playoffs but one runner-up will still miss out with the nine due to be ranked on the basis of their results against the sides that finished first, third, fourth and fifth in their respective groups. So here is how is it shaping up . . .

As things stand, the Welsh are second with 14 points but only eight have come against top five sides and Chris Coleman’s side are currently last, behind Bosnia and Herzegovina on goal difference, in the table of second-placed teams.

Ireland could, in theory, leapfrog them without winning in Cardiff if the Welsh fail to win in Tbilisi. In reality, though, Martin O’Neill’s men most likely need to win the game regardless so as to bolster their position in the playoff table.

Though the 11 points (and goal difference of plus one) that a draw would put them on could be enough to get them into the knockout round assuming things went well in other groups, it is unlikely. Ireland could actually still win both games then bow out. Assuming they do win both games and the margin of victory on Monday is a single goal then they will have 13 points in the playoff table and a goal difference of plus two. They will then need at least one second-placed side to be worse off than that from their games against the team that finish first, third, fourth and fifth in their group.

Sweden are currently second but could yet overhaul France. If they did, and the French somehow lost both of their remaining games – Bulgaria (away) and Belarus (home) – then it would most likely change the order of things at the foot of the table and so alter which results count in the ranking of second-placed sides. And if all of that came to pass, Didier Deschamps’s side would end up on 13 points but still almost certainly have a better goal difference than Ireland.

The Swedes have currently 10 points in the playoff table with games at home to Luxembourg then away to the Dutch to come. The game against Luxembourg will count as things stand with a win taking them to 13 points and improving their current plus three goal difference. They previously drew 1-1 with the Netherlands who may well go into this game needing a huge win to snatch second place. That, though, looks pretty unlikely to happen.

Portugal and Switzerland are still contesting top spot but whichever of them misses out will be in the playoffs.

Northern Ireland are unlikely to catch Germany but are guaranteed at least second place. They currently have 13 points in the playoff table and a goal difference of plus seven with Germany at home then Norway away to come. Clearly a hammering by the World champions could place them in a little bit of peril going into their last game but they currently look pretty good.

Poland look set to win this group but if they are caught, and finish second, then they will be in the playoffs. The more likely contenders are Denmark and Montenegro who are tied for second both on points and goal difference.

In terms of the playoff table, the Danes have the better goal difference – six versus three. The two rivals play each other in Podgorica next, after which the Danes face Romania at home, the Montenegrins have Poland away.

In the event that the game between them ends in a draw, it is not at all inconceivable that another point would be enough for Denmark to finish second in which case they would have only 12 points in the playoff table. That’s very much a best-case scenario for Ireland, though.

England have all but won this group but it’s very tight after that with Slovakia leading Slovenia and Scotland by a point. The Slovaks look well placed to hold on to second place as they have Malta at home to come in their last game but if the Scots can beat them in Glasgow then they will most likely go to Slovenia knowing a win would guarantee them second place (theoretically, a draw could be enough).

With a win, the Scots would end up with 14 points in the playoff table. The Slovaks currently have 12 and the game against Malta is ultimately not going to count for anything so they can only add to that next time out. If they draw in Scotland but come second in the group they would end up with 13 which their current goal difference of plus six suggests would be enough to finish ahead of Ireland.

Spain are three points clear with Albania at home then Israel away to come which points to Italy winding up in second place.

In playoff terms the Azzurri currently have 13 points and a plus three goal difference with games against Macedonia at home and Albania away, both of which will count, to come. They are, in other words, of no interest to us.

Belgium have already qualified. Second place looks to be between Bosnia and Herzegovina and Greece although Cyprus aren’t entirely out of it.

Of the better placed two, the Bosnians lead their rivals by a point but have to play Belgium at home before travelling to Estonia. The Greeks visit Cyprus before hosting Gibraltar.

In terms of the playoffs, the Bosnians currently have eight points with those two games to come, the Greeks 10 with just one that is going to count. They currently have goal differences of plus two and three respectively. There are a couple of ways in which this group could produce a second-placed team with just 10 playoff table points, a scenario that makes Ireland progressing with just a draw in Cardiff possible but something in the 11-14 point range looks more likely.

Still, this could be a key group for Ireland and it does not conclude until Tuesday.

This is another tight one but Croatia and Iceland are best placed to take the top two spots. They are currently tied on 16 points apiece with one relatively straightforward and one tricky game to come.

It is hard to see Turkey or Ukraine nicking second spot without winning their last two games and in both instances that would leave them with 14 playoff points.

1 Cam Newton broke the mould: Can his flame be rekindled at the Patriots?
2 The Game Changers: Vincent O’Brien, a pioneer who took Irish racing to the world
3 The unsolved mystery of Goran Ivanisevic’s stunning Wimbledon win
4 Tuilagi case shows England’s home-based clause is out of date
5 UK Sport to investigate ‘deeply troubling’ gymnastics abuse allegations
Real news has value SUBSCRIBE
Crossword Get access to over 6,000 interactive crosswords