Martin O’Neill on a collision course with Ronald Koeman 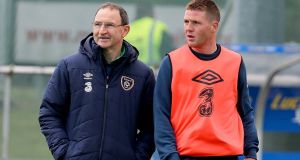 Martin O’Neill looks to be on course for another clash with Ronald Koeman after suggesting James McCarthy might yet feature in Ireland’s World Cup qualifiers against Moldova and Wales during the coming week.

The Everton manager made it abundantly clear last week that he believes McCarthy is some way off a return to competitive football. But O’Neill said yesterday the midfielder does not want to be ruled out of games and that he will assess the player’s situation on a “day by day” basis.

“I would have thought,” said O’Neill after his squad trained for the first time this week, “that given the amount of time James has been out, and he picked up the injury at club level, Everton would be quite pleased that he is out of the environment for a little while, training with the international boys and see how things go.

“And beyond that, if he’s feeling pretty decent then I would have thought that that’s something Everton would have been quite looking forward to.”

Harry Arter (calf) trained with one of the FAI’s physios yesterday while Eunan O’Kane (ribs), Shane Long (dead leg), Jonny Hayes (ankle) and David McGoldrick (hamstring) all sat out the session. O’Neill, though, seemed optimistic that all will ultimately be available.

With Jon Walters out and Ireland already finding goals hard to come by, Long is perhaps the biggest concern but O’Neill suggested Scott Hogan and Sean Maguire might also nudge their way into contention.

“I’ll see how the next couple of days go,” he said. “Generally speaking, if I know the players pretty well, then a couple of days training beforehand is not a major concern. But if I don’t and there’s a possibility of someone playing, training becomes pretty important for me.”

Hogan finds himself in the Ireland set up just four years on from plying his trade for semi-professional side Hyde United in the fifth tier of English football.

Back in January, Aston Villa signed the striker – whose father’s family hail from Carlow – for €13.5 million, the latest switch in the 25-year-old’s Jamie Vardy-esque rise through the divisions.

Having started on the books at Rochdale, Hogan was released in 2010 and then played for a number of non-league clubs – including Vardy’s former side Stocksbridge Park Steels – before finding his way back into league football.

He said: “It was a tough one, really. I used to play with friends. A lot of people I knew around there used to go around the non-league scene, playing for cash in hand, and I also did a lot of work - warehouse jobs, shelf-stacking, cleaning, driving recycling vans. I did everything.

Yet while Hogan’s progress from non-league to the Championship – via a second spell at Rochdale Town – may appear accelerated, the Salford-born striker’s call-up comes after a number of seasons which have been interrupted by injury.

Hogan ruptured cruciate ligaments during his Brentford debut against Rotherham in August 2014 – and it was 18 months before he played again. When O’Neill came calling at the end of the 2015/16 season, Hogan told the Ireland manager he wanted to get a full season under his belt before making the step up to international level.

He said: “I came back from an injury and scored seven in four games – I think there was a bit of interest there and a few calls, but he [O’Neill]was great with me, he was always aware of my situation with me and my knee.

“The communication was fine, up until Christmas it was agreed I want to get a year of football under my belt – I want to get a season. I’ve not played a full season in my whole career . . .

“I made the contact – I rang up and said ‘look, I feel ready, I’ve had a season under my belt – I’m ready to be considered’.”

And now the decision to bide his time has paid off, with Hogan arguably ahead of fellow new call-up Sean Maguire in the pecking order for Friday’s clash with Moldova.

A lifelong Manchester United fan, he flew to Dublin with boyhood idol Roy Keane on Saturday: “He was queuing up for the plane, we were on the same flight. Then I walked up and he shook my hand. It was a nice moment for me.

“He just said: ‘hello’ and ‘where have you been for the past year?’”