Danilo’s relentless quest for trophies should stand to City

The Brazilian defender, still only 26, had a glittering CV before joining Manchester City 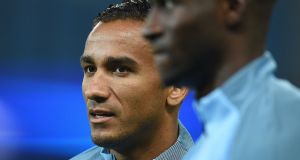 Danilo smiles and pulls up a trouser leg to show a tattoo below his left knee: Conquistando o impossível pela fé – “Conquering the impossible for faith”.

The Brazilian is relating how, long before his £26.5 million (€30 million) summer move to Manchester City, the club had a defining impact on his career.

Danilo has an easy manner that lightens the mood throughout the discussion about his storied life and already stellar career. Only 26, he has scored the Copa Liberdatores winner for Santos, claimed two consecutive Primeira Liga titles with Porto and enjoyed two Champions League successes plus a La Liga triumph at Real Madrid. All of this has been achieved because of a steely self-determination that drives him and allowed him to overcome a serious knee injury suffered against City five years ago.

In February 2012 Roberto Mancini’s team were at Porto for a Europa League last-32 game when, in the first half, Danilo was carried off following a challenge with Yaya Touré. The injury ruled him out for the rest of the season and, pointing to the tattoo on his knee, Danilo says: “I have a lot of tattoos; 90 per cent have a meaning. This sentence is from a Brazilian song that talks about religion and God. I’m a very religious person, and when I got injured against Manchester City in that knee I stayed out for three months. When I finally recovered I make this tattoo to remind me of my strength and how I overcame this setback.”

This clear-eyed focus made Danilo the first elite footballer from the small town of Bicas in Minas Gerais, after his father’s determination won him a trial with neighbouring Tupynambás. “Bicas has only around 15,000 people, and agriculture is the main industry,” he says. “It’s the kind of town where everyone knows each other and, for example, when I go there on holidays I’m always very well treated and I can even walk without shoes, without shirt – I feel like anyone else.”

“My cousin Cesar plays for Cruzeiro, he’s 19 years old, and is also in the youth teams of Brazil, so maybe he can be the next hope from Bicas. My dad played – never professional but he loved football. In my town and the surrounding area, he was one of the best players, so I watched him and that’s where my passion for football started.

“David Luiz is a really good friend. Hopefully after the game I can send him a message making a joke about our win.

“I started at six and was a goalkeeper with the kids my age, and when playing with older guys I used to play in the defence, like now. I played there until I was 12, then I moved. I’ve always been a football fan, and when I was little my family and I used to support Flamengo, which was probably the most popular team at that time. As for looking up to any player, I really liked Steven Gerrard.

“Tupnyambás is a bigger city next to mine. My dad went there to talk to the club to ask for a trial for me. He kept insisting so finally I got a chance and from then it was down to my hard work.”

Danilo was signed by Pep Guardiola in July as a player who can operate at both full-back positions and as a holding midfielder. Despite the sense he may be a utility player in the latter role, he is accomplished there, operating in front of the defence in Santos’s triumphant Copa Libertadores campaign in 2011.

After leaving Tupynambás in 2006 for Rio de Janeiro’s America FC, Danilo’s professional debut came in 2009 before he joined the club made famous by Pelé the following year. Santos had failed to win South America’s equivalent of the European Cup since Pelé led them to the victories of 1962 and 1963. Danilo was a driving force in a side that ended the 48-year drought and scored in the second leg of the 2011 final, a 2-1 victory over Peñarol, with the other goal coming from Neymar.

He says: “In that competition I played 90 per cent of the games in midfield ... I was even the second-highest scorer [for Santos] after Neymar, and that gave me the vision to think I could play in midfield as well. It was a really big emotion for me to score. First, because it was a very important goal for the history of the club. It was finishing a job both for me and the team, as a project. Also it was important because all my family were at the stadium.

“I can’t say it’s the very best feeling on the pitch but one of the best I’ve had in the world of football. I was younger, so you didn’t feel or are not aware how big that moment would be. But, for example, now years later when I go to Santos and see my pictures on the wall it makes you realise how important it was.”

“I’m obviously very proud of everything thing I’ve won. I’m satisfied that I turned my job into trophies,” he says. “But I don’t wake up every day and think about what I won. It’s what is waiting for me, what I can achieve and still win is the challenge. I’m looking forward and willing to win more trophies at City.”

Guardiola came close to signing Dani Alves from Barcelona before the right-back went to Paris Saint-Germain. Yet Danilo believes there would have been space for both of them in the Catalan’s squad. “Even if I was here [Alves] could have come, it wouldn’t have been any problem,” he insists. “We have [Kyle] Walker as well. He’s a great player so I don’t think if Alves had come it would have been an issue [for me].”

Along with Walker and the injured Benjamin Mendy, who may now miss the rest of the season with a knee injury, Danilo completed the trio of full-backs recruited by Guardiola.

“Everything happened very quick – it wasn’t in the plan. There was no contact before this summer but then there came a time when the club, the coach and the coaching staff showed a lot of interest in me. Then it was very clear and easy for what path I should take. Because of how professional they seemed and the structure of the club.”

City’s flying start to the campaign has featured eight wins and a draw in all competitions, and they are Premier League leaders going in this weekend. The meeting with the champions, Chelsea, on Saturday should be City’s sternest test yet. But Danilo will still find time to joke with David Luiz, despite the centre-back being suspended.

“Yeah, he is a really good friend. He used to live in the city of Tupynambás so we are close and also know each other from the Brazilian national team,” says Danilo. “So I’ll send him a message, I’ll hug him if I see him in the stadium and hopefully after the game I can send him a message making a joke about our win.”

This is typical of the balanced approach shaped by Danilo’s hard-won career. Asked for a low point, he thinks a moment, then says: “When I first went to Santos it wasn’t easy for me because before I used to live with other players but I lived in an apartment on my own there. I thought it was going to be good but in the end it turned out to be difficult because I was alone, by myself. So it was a difficult moment and even I felt sad. But then everything worked out.”