‘People make a lot of it, but a lot of footballers play it and it’s one thing I really enjoy’ 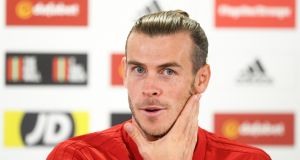 Gareth Bale has admitted he is more than happy to be nicknamed the “golfer” at Real Madrid, following a comment that Thibaut Courtois made about him earlier in the year, and has also defended his passion for the sport he was photographed playing while his club were competing in a pre-season tournament.

The Welshman, speaking before Friday night’s Euro 2020 qualifier at home to Azerbaijan, gave the impression that he wastes no energy thinking about his critics and said that those seeking the reasons behind the bitter breakdown in relations at his club this summer “need to ask Real Madrid”.

Asked about the “golfer” moniker, Bale smiled and replied: “I am a golfer. Have you not seen the pictures? I spoke to him [Courtois] about it and he said it as a joke. People took it out of context, but I’m very happy with the nickname, to be honest. It’s a great one. Football is my No 1 sport. I’m paid to do it and I always give my best.

“Golf is a hobby like anyone else would have a hobby. There is nothing wrong with having a round. People make a lot of it, but a lot of footballers play it and it’s one thing I really enjoy. It keeps me calmer off the pitch and gives me time away from football, which is nice.”

Bale, however, has had more time away from football than he would have liked since Zinedine Zidane returned to take charge of Madrid for a second time in March. Bale was marginalised almost immediately and everything pointed to him leaving in the summer, only for a lucrative move to the Chinese club Jiangsu Suning to collapse.

“Coming back to pre-season I just kept my head down,” said Bale, who is back in the Madrid team and scored twice against Villarreal on Sunday before being sent off. “I know there was a lot of talk with everybody saying good, bad, whatever they wanted. I just worked hard in training and got myself ready. The things that happened will stay private with the club. If you want answers, maybe you need to ask Real Madrid.”

Pressed on his critics – and plenty have had their say over the summer, whether about his football, failure to learn Spanish or his financial demands – Bale was dismissive. “I don’t listen to them because they don’t really know what they are on about,” he said. “I don’t read anything, I don’t listen to anyone. I know most people don’t know the situation, don’t understand the situation. What they write means nothing.”

Bale was also quick to provide some context when quizzed on whether this ranked as the worst time of his career. The 30-year-old referenced his early days at Tottenham Hotspur, when he came close to joining Nottingham Forest. “It’s obviously not been great [this summer],” he said. “I wouldn’t say it’s the worst time of my career. I remember not playing for a year under Harry Redknapp. ” – Guardian