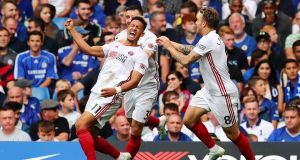 Sheffield United came from two goals down to earn a 2-2 draw at Chelsea which leaves Frank Lampard still looking for a first home win in charge.

The Blues looked to have the points in the bag as Tammy Abraham’s first-half double gave them a comfortable half-time lead, but the Blades mounted an impressive second-half recovery.

Callum Robinson got it under way less than a minute after the restart and then Kurt Zouma’s own goal in the 87th minute earned a deserved point for the Blades.

Lampard was fuming when the leveller went in, throwing a bottle down in disgust, but his young side’s soft underbelly was exposed by the Blades.

The former Derby boss has had his hand forced in turning to youth, but it is a method he is fully committed to and he awarded a first start to Fikayo Tomori.

The 21-year-old defender was on loan with Lampard at the Rams last season and his inclusion gave the Blues an average age in their starting XI of 24 years and 158 days, the youngest in the Premier League era.

One of the leading lights in that young group is Abraham and, having scored goals for fun in the Championship over the last few seasons, he is quickly establishing himself as a top-class striker at the highest level.

He opened his account for the club with a double at Norwich last week and needed only 18 minutes to grab a first goal at Stamford Bridge which may have England boss Gareth Southgate thinking twice about leaving him out of his youthful squad for the Euro 2020’s qualifiers.

The 21-year-old fired home at the second attempt after Blades goalkeeper Dean Henderson had fumbled his original weak header to put his side in control.

Whatever Sheffield United go on to achieve this season, they will be remembered for their introduction to the Premier League of overlapping centre-backs and it was that approach that should have earned them an equaliser.

Chris Basham, who had earlier squandered a good chance of his own from the edge of the area, hooked a delightful ball across goal that was begging to be converted — but somehow Robinson squirmed a header from inside the six-yard box.

And that turned into a costly miss just minutes later as Chelsea and Abraham doubled the lead.

Blades centre-backs John Egan and Jack O’Connell, actually in a defensive position, went for the same ball, allowing Abraham to nip in and fire home, with Henderson getting a hand to it.

That Robinson miss would not have preyed on his mind for too long, though, as he made amends less than a minute after the restart.

Enda Stevens got in down the left and cut back for the former Preston striker to fire home his first goal in the club.

That changed the dynamic of the game as Sheffield United began to press and fluster their opponents.

But Abraham remained a threat for the hosts and would have been celebrating a hat-trick had it not been for Henderson, who brilliantly got down low to to keep out his England Under-21 team-mate’s shot from Cesar Azpilicueta’s cross.

The Blades continued to test Chelsea and put them under long periods of pressure and it was rewarded with an equaliser three minutes from time.

Robinson impressively delivered from the left and although Lys Mousset looked to get to the ball first, the final touch game off Zouma, who was awarded the own goal.

Boss Chris Wilder will not care too much about that, though, as his team celebrated a second point on the road of the campaign.