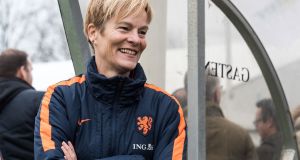 Vera Pauw: “I took some time to consider but their honesty convinced me to accept,” said the new Republic of Ireland women’s manager of the FAI’s approach. Photograph: VI Images via Getty Images

Finance is never far away from FAI matters these days and the newly-appointed Republic of Ireland women’s team manager Vera Pauw confesses it will take an improvement in cashflow for the potential of the squad to be realised.

Although the job of salvaging the association’s balance sheet will likely extend beyond the duration of her brief contract, the Dutch native still feels the talent is available to guide the senior team to a first major tournament at the 2021 European finals in England.

The prospects of that feat materialising will be clearer soon enough as second seeds Ukraine visit Dublin on October 8th.

Germany, eight times winners of the tournament, are expected to cement the one automatic qualifying berth sooner rather than later, evidenced by them hammering the Ukrainians 8-0 in Kiev over the weekend.

Montenegro, despite Ireland toiling to a 2-0 victory over them in Tuesday’s opener, will be doing well to get off the mark over the series, their best hope likely to be against a Greece side yet to play.

It leaves Ireland in a probable shoot-out with Ukraine for the runners-up spot, an outcome that would at least seal a play-off. The three best second-placed teams across the nine groups head straight to the tournament.

“Colin Bell’s side came up against Norway and Holland in their last group,” said Pauw in relation to her predecessor’s third-place finish in the World Cup qualifiers.

“Ukraine are not in the calibre of either of those nations. This is a crucial game for us but I think Ukraine are beatable, as are we. The aim would be to get at least a win and draw from our two games against Ukraine.

“Once we beat the nations seeded below us, Greece and Montenegro, that would guarantee the runners-up place.”

Pauw (56) has been on the professional circuit long enough to be familiar with the challenges facing Irish football.

After a distinguished playing career, during which she earned 89 caps for the Netherlands, spells in charge of Scotland, her homeland, Russia and South Africa followed.

The work of her husband Bert van Lingen as assistant to Dick Advocaat at Rangers and Russia allowed the couple travel and work abroad together.

Her partner won’t be joining Pauw in Ireland as this assignment didn’t form part of her career path.

Following short stints at Houston Dash in America and with the Thailand national team before the recent World Cup, an indefinite period of relaxation was on the agenda.

Then, she got a call out of the blue from her compatriot Ruud Dokter, the FAI’s high performance director rocked by the resignation of Bell just nine weeks before the campaign was to begin.

“I had not retired but wasn’t planning a full-time job like this that you have to throw your whole self into,” she explained. “When Ruud rang, I was going to Austria on holiday the next day, so they had to meet me in Frankfurt.

“Noel Mooney [caretaker general manager] and Donal Conway [president] flew over and were very clear about the problems facing the FAI. They didn’t want to paint a picture that is brighter than it is.

“I took some time to consider but their honesty convinced me to accept.”

Pauw has agreed to come onboard initially just for this campaign, admitting the quest to professionalise the Irish domestic game is impaired by the association’s current financial predicament.

While most of her squad are based abroad in full-time set-ups, the women’s league here hasn’t even reached semi-professional status.

“If the gap between the home-based players and the professionals is getting too big, you do not have a future in the game,” she asserts.

“It is clear that money is needed to change that situation. We need to be at least compensating the players for loss of earnings from their main jobs. That is a discussion I have already had with the FAI. We need to be creative.”

Ken Early on resurgent Man United, Malachy Clerkin on De Chambeau’s new look 07:46
Tipping Point: DeChambeau’s transformation raises questions, but who will ask them? 07:00
John Maughan: This year's All-Ireland will be tainted, whoever wins it 06:45
Ken Early: Resurgent United can be the top team – in Manchester 06:46
TV View: Stunned silence as Serpentine wins a socially-distanced Derby 06:00

1 Tipping Point: DeChambeau’s transformation raises questions, but who will ask them?
2 Ken Early: Resurgent United can be the top team – in Manchester
3 The Game Changers: How Jonah Lomu’s dramatic arrival heralded rugby’s new dawn
4 John Maughan: This year's All-Ireland will be tainted, whoever wins it
5 TV View: Stunned silence as Serpentine wins a socially-distanced Derby
Real news has value SUBSCRIBE
Crossword Get access to over 6,000 interactive crosswords