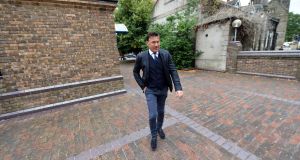 Former Liverpool striker Dean Saunders has been jailed for 10 weeks for failing to provide a breath specimen after being arrested on suspicion of drink-driving.

The 55-year-old looked crestfallen when he realised he was going to jail as keys jangled and prison officers entered the dock at Chester Magistrates’ Court.

Saunders, who also played for Aston Villa and Derby County and was capped by Wales 75 times, refused to give a roadside breath test and, when taken to a police station, again failed to provide a breath sample, the court heard.

He pleaded not guilty at an earlier hearing but on Wednesday he admitted a charge of failing to comply with a roadside breath test and failing to provide a breath sample for analysis in Boughton, Chester, on May 10th this year.

Saunders was also banned from driving for 30 months and ordered to pay court costs of £620.

He said he had been out at Chester Races and had drunk two pints.

His lawyer suggested this may have “interacted” with the medication he takes for injury to his knees and his inhaler for his asthma.

Police who arrested him said Saunders was slurring his speech and had to prop himself up against his Audi A8 car when he was asked to get out of the vehicle.

He was due to go on trial on Wednesday but indicated through his lawyers on Tuesday that he would not be contesting the charges and entered his guilty plea on Wednesday morning.

Passing sentence, District Judge Nicholas Sanders told him: “Throughout these proceedings you have shown yourself to be arrogant, thinking you are someone whose previous and current role in the public eye entitles you to be above the law.

“In fact the opposite is true — someone in the public eye should expect a deterrent sentence when they flout the law.”