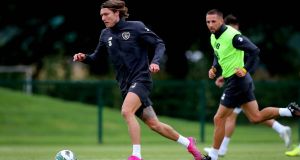 Jeff Hendrick: set to win his 50th cap for the Republic of Ireland against Switzerland at the Aviva. Photograph: Ryan Byrne/Inpho

Is it 15 games they say a player needs to really get to grips with the pace of international football? Mick McCarthy’s second stint of managing in it will be flying after five, if Ireland can beat Switzerland on Thursday night.

The order of the games so far has helped, of course, and Ireland’s position in this qualification table needs to be taken in that context.

Win this one, though, and McCarthy would have engineered a slender but genuine advantage he certainly sounds like he believes his players could maintain to the end of the campaign. It would be wonderful just to see the theory tested.

The tone of the talk from the visitors’ camp is that it won’t happen. Vladimir Petkovic and his players are confident and their better performances over the past couple of years suggest they have some cause to be.

While Ireland were seemingly aspiring to scoreless draws in the Nations League last year, the Swiss were scoring six, then five, in home games against Iceland and, almost incredibly, Belgium respectively.

They are not an unstoppable force, though, as the late collapse against the Danes in March so clearly showed. Surrendering an 86th minute three-goal lead may yet prove to have a lasting impact on the team’s qualification campaign.

More pertinent, perhaps, on this occasion was their World Cup exit last year to a Swedish side that was already showing signs of running out of steam by the time the two countries met at the last 16 stage in Saint Petersburg.

The Swiss started as favourites but their opponents worked hard enough to prevent them completely dictating the pace or pattern of things. Petkovic’s men still enjoyed two thirds of the possession and 60 per cent of the attempts on goal but their finishing was poor and when they eventually fell behind, they simply lacked the collective spirit required to save themselves.

Xherdan Shaqiri played 90 minutes that day but looked precisely like a player who would have trouble getting into a really good club team. Stephan Lichsteiner did not play and the absence of the then captain, through suspension, was viewed by many of the team’s supporters, as having been crucial when it came to the closing stages with the team desperately needing to find another level.

The 35 year-old has been left behind now because he has just moved club and the coach did not feel he had played enough football at his new one to be ready for this game. It just might be that we have been celebrating the absence of the wrong Swiss player these past few days.

Ireland will, like Sweden, in any case, need to stop their opponents settling into their own game at the Aviva. Predictably, though, McCarthy does not need anyone to spell that fact out to him.

“That [them dictating things] is what they’d like to happen, of course, and we’ll try to stop it because they’re a very possession-based team,” he said at Wednesday’s pre match press conference.

“We’ve watched them over a couple of games – two or three games, actually – and they like to dominate a team with possession, and we’ll be doing our very best to stop that.”

More than that, Ireland will be anxious to win the game and look a little better equipped to do it with a system in which the team’s key players appear to feel at home. Jeff Hendrick, who is set to make his 50th senior appearance, certainly sounds happier now about the role he is being handed while Conor Hourihane’s performances at this level have been completely transformed since the change of manager.

The Corkman’s set pieces have suddenly become a key element of the threat posed by McCarthy’s men while Callum Robinson has injected energy and fearless enterprise into a team that often looked tired and out of ideas a year ago.

Tellingly, McCarthy says he would take the draw if it were offered before kick-off and that would certainly still provide a platform from which to press for a top two spot in the autumn. Critically, Ireland will have to defend well to get even that but the manager sounds confident on that front.

“I was disappointed with the goal we conceded in Denmark,” he says. “It was a great goal by their standards but, for us, we let a cross come in that we didn’t deal with. Overall, though, I think they’ve been excellent, the back four.

“I think we’ve got good defenders, people who want to defend as well and put themselves in the way of things, block things, head things. But they’ve been ably assisted by all the lads working really hard. It’s been a team effort.”

“We didn’t approach the game in Denmark in the sense of sitting back and trying to defend, though. We wanted to be on the front foot and we’ll be doing exactly the same against Switzerland. We’ll give them exactly the same respect we have Denmark because they are a very good side and they are the best two teams in the league without any doubt.

“I think the pressure is on us as it’s our home game, though; we have to do something tomorrow night.”

1 Andy Farrell ticking all the boxes in advance of England showdown
2 Ireland wary of Peyper calling the tune as they head for Twickenham
3 Owen Doyle: Day of the jackal may be coming to an end
4 David Brady says he's witnessed illegal payments of GAA managers
5 Players impressed with Bono’s Irish pride and desire
Real news has value SUBSCRIBE
Crossword Get access to over 6,000 interactive crosswords