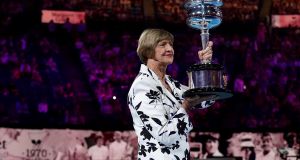 Margaret Court is presented with a replica trophy during a ceremony to mark the 50th anniversary of her Grand Slam win at the Australian Open. Photo: Scott Barbour/EPA

Margaret Court, as awkward in life as she was on the tennis court – they did not call her “Arms” for nothing – got her brief moment in a reduced spotlight here on Monday evening, but it was an anti-climactic celebration of her long-ago achievements.

If the 77-year-old “Aussie legend” known for her homophobia now more than her genius on court, deserved plaudits for anything – apart from doing the calendar grand slam 50 years ago – it was enduring one of the most embarrassing awards ceremonies outside a Golden Globes night with Ricky Gervais at the microphone.

A gay pride flag, with the old Union Jack still in the top left-hand corner, embellished in purple, fluttered high in the stands – in contradiction of ridiculously uptight tournament regulations about political statements – before the ceremony. Elsewhere in the arena, the gathering was quietly respectful, and a fair way short of effusive. Court, with Rod Laver by her side in his eponymous arena, held aloft the trophy presented to her, and she looked pleased enough, posing for the cameras briefly before walking slowly towards the exit. A few fans stood, but most were either indifferent or careful not to ruin the already downbeat mood. They had come to see Rafael Nadal and Nick Kyrgios duke it out, not a grand old dame of the game pick up a gong.

Leaving the big stage – probably for the last time – she might have regarded the short, underdone exercise as much as she was ever going to get from the tennis establishment. It’s what she demanded. Tennis Australia had shuffled its feet, dodging tough issues and hoping, no doubt, that the controversy would die a quiet death. As in life as on the tennis court, Court was always a determined character. She was going to embarrass the hell out of them, come what may.

Others had written their reviews before the performance, but some dodged the issue. Serena Williams, who again fell short of matching Court’s all-time of record of 24 majors, would not be drawn before he early exit. John McEnroe, not a fan, predictably was the most vocal, dubbing Court, the “crazy aunt” before launching into an uncomplicated diatribe.

“There’s only one thing longer than the list of Margaret Court’s tennis achievements: it’s her list of offensive and homophobic statements,” he said on Eurosport. “Just a few examples. During the apartheid regime in South Africa, she said: ‘I love South Africa. They have the racial situation better organised than anyone else.’ What?

“About transgender children and LGBTIQ: ‘It’s all the work of the devil – tennis is full of lesbians. it is sad for children to be exposed to homosexuality’. Serena, do me a favour: get two more grand slams this year and get to 25, so we can leave Margaret Court and her offensive views in the past, where they both belong.”

Martina Navratilova, who has been vocal in print and social media in her objection to Court’s hompohobia, said on Monday, “It’s just unfortunate because I think what Margaret Court doesn’t realise is how many people she hurts with her rhetoric. She can believe whatever she wants but she’s actually hurting people and that’s not okay.”