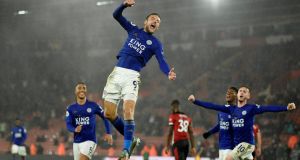 An irresistible Leicester City display shot Southampton to pieces as Brendan Rodgers’s side moved second in the Premier League in considerable style, condemning Saints to their worst ever home defeat.

Ayoze Perez and Jamie Vardy hat-tricks in an embarrassing rout that set a new Premier League record away win and laid bare Leicester’s top-six qualities while exposing familiar flaws in the Southampton defence.

Goals by Ben Chilwell, Youri Tielemans and James Maddison inflicted lasting damage on Southampton, who had Ryan Bertrand sent off 13 minutes into this non-event.

Rodgers had said his purring Leicester side are only at the beginning of where they want to go and, on this evidence, that is a frightening assertion given the manner with which they humiliated the hosts.

This was a worrying Southampton capitulation for Ralph Hasenhüttl, whose side have conceded 15 goals in their past five matches and, unsurprisingly, have the worst home record in the division.

Hasenhüttl acknowledged his side needed to address their wretched home form, having won only 15 of their past 61 matches at St Mary’s, but by the time they were finally put of their misery here, there was plenty more for the Southampton manager to address.

When fourth official Andy Madley signalled for two minutes of first-half stoppage-time, hundreds if not thousands of Southampton supporters had headed for the exits on a chastening evening.

Moments before, Vardy had added rubbed salt into the wound, adding Leicester’s fifth after fooling Maya Yoshida inside the box before hammering beyond Angus Gunn. With 18 minutes and 34 seconds on the clock here, Leicester had three points safely secured and they were cantering to victory. The retrospective red card given to Bertrand, whose studs caught Perez on the shin, did not help matters but Southampton were playing second fiddle from the off.

The pre-match playlist comprised anthems by The Prodigy and Fatboy Slim but Hasenhüttl’s side start was meek by comparison. Ten minutes in, Leicester fans celebrated Chilwell’s opener by waving white scarves, which were placed on every seat in the away end in tribute to their former owner Vichai Srivaddhanaprabha, whose death was a year ago on Sunday, and soon after Southampton raised the white flag.

Chilwell was fortuitous but made his own luck surging down the left, scuffing a shot at goal, which pinballed off Harvey Barnes and eventually back into his path, via Gunn’s clearance. Chilwell smashed home and that was just for starters as far as Rodgers’s boisterous side were concerned. The video assistant referee Mike Dean spotted Bertrand’s challenge, which was replayed on screens, allowing Leicester supporters to revel in Southampton’s struggle as the referee Andre Marriner sent the defender trudging down the tunnel.

Southampton’s resistance was feeble at best, arguably non-existent. Youri Tielemans drilled in Leicester’s second after Yan Valery inadvertently prodded the ball into his path following another marauding run by Chilwell.

Ninety seconds later, Leicester were wheeling away in celebration once more, with Tielemans again instrumental. Ricardo Pereira kick-started the move, which was finished rounded off by Perez after a neat give-and-go with Tielemans.

Things went from bad to worse when Perez fired home unmarked at the back post, ghosting in behind Valery. Then Vardy got in on the act, bamboozling Yoshida after Chilwell’s cross deflected into his path. Vardy cheekily put his tongue out in celebration as Southampton desperately sought the half-time whistle. The visitors, and Barnes in particular, were toying with a brittle Saints back line.

Southampton kept a clean sheet for the first 11 minutes of the second half, for which Kevin Danso and Jack Stephens replaced Ings and Jannik Vestergaard, but then Gunn’s net was bulging once more.

Perez completed his hat-trick as he established a gaping hole between Danso and Yoshida and duly chested a flighted Barnes ball down before applying a thumping finish.

Two minutes later, Gunn was fishing the ball out of his net again, with Vardy this time the culprit. Southampton again allowed Chilwell to dance down the left and the England full back put the ball on a plate for Vardy to pounce. The away end craved eight. Maddison obliged, finding the corner with a sweet free-kick before Vardy completed the scoring with a penalty. – Guardian