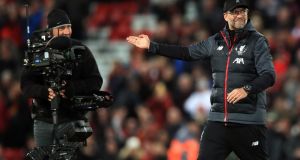 Jürgen Klopp said he loved Liverpool’s rousing comeback against Tottenham, but no one inside Anfield would get carried away with a title challenge he described as merely a case of “so far, so good”.

Liverpool restored their six-point lead over Manchester City at the top of the Premier League with a stirring 2-1 win over Spurs despite falling behind to Harry Kane’s header after 47 seconds. Jordan Henderson, with his first league goal at Anfield since December 2015, and a Mohamed Salah penalty delivered a ninth win of the campaign for the leaders.

Only two teams have won nine or 10 of their opening 10 games and not gone on to win the title – Manchester United in 1985/86 and Liverpool in 1990/91 – but Klopp insisted Liverpool’s focus will not divert from the immediate task in hand.

“Twenty-eight points is good but you only have to think what would have happened if we had lost today, what the question would have been,” the Liverpool manager said. “We know exactly what we have do. We have to be focused on all the games, next one Arsenal, then Aston Villa, then Genk, then Manchester City. There is a lot to come but so far, so good.”

Sadio Mané, who was fouled by Serge Aurier for the decisive penalty, concurred: “Every win is a big moment. Of course we want to win the title but it’s too early to speak about it. They scored first but I was thinking in my own mind we were going to come back. We deserved to win.”

Klopp, who played down the seriousness of the ankle problem that forced Salah to be substituted, insisted Liverpool’s response to falling behind inside the first minute was exceptional. “I expected it to be honest. An early goal is not the best thing that can happen but it makes one thing clear – game on. I loved the game.

“It was a super game and how football should look and how you should play against a really strong, good, organised side. The counter-press was exceptional, we wanted to be really strong in that department. We pushed them back, created chances, but the goalie [Paulo Gazzaniga] made super saves. What a game he had. The first goal we scored, I loved. In other games when the striker goes down and shouts for a penalty other players switch off, but Hendo was not bothered and finished it off really nice. The second goal is a sensational counter-press from Sadio.”

Salah was withdrawn with five minutes remaining, having felt a recurrence of the ankle injury he sustained against Leicester and that forced him to miss the draw at Manchester United last weekend. “He has struggled since [the] Leicester game but it is good,” his manager said. “The longer the game goes and you get a knock and feel it more, it makes no sense to push it through. Nothing serious.”

Mauricio Pochettino described Spurs’ fourth Premier League defeat of the season as a moment for his club to stay strong and show unity. The Champions League finalists are now 11th in the table and their manager admitted Son Hueng-min’s miss, when he struck the bar having rounded Liverpool goalkeeper Alisson, underlined how the fine margins are not going their way.

“In this season I think we deserve more points,” Pochettino said. “It didn’t happen, so it is the moment to stay strong and keep pushing. In a different situation [with Son’s chance] maybe it finishes 2-0 or 3-0 for us.”

On the penalty decision against Aurier, the Spurs manager said: “I need to accept the decision from the referee and the VAR. Technically maybe it is [a] penalty because there is a contact, but to be honest the ball is going away or to the side. It is very soft. He [Aurier] is not happy, no one is happy. After five years and a half at Tottenham, I think it is a moment to be all together and show our support.”