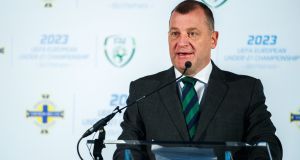 Kieran Lucid insists that work on his proposal for an all-island league will continue despite a statement from the Irish Football Association (IFA) on Thursday to the effect that it will not sanction any of the northern clubs to participate.

“We note the announcement of the IFA,” said the Kerry born tech entrepreneur by way of reaction in a statement of his own. “The project we are embarked on is to support and improve the lot of professional football clubs on the island of Ireland.

“We remain focused on that objective. A considerable amount of work has been done to date; clubs are being regularly updated and consulted with as we make progress. The work will continue.”

Earlier, the IFA had appeared to deal a major blow to the proposals by stating in very clear terms that it would not allow any of its clubs to participate in such a competition in the event that the venture actually got off the ground.

Only last week in Dundalk Lucid met with representatives of many Airtricity League and Northern Ireland Football League sides and came away believing that the response had been positive to his request that a Dutch firm of consultants assess the scheme’s potential in much finer detail.

In the wake of Thursday’s statement, one of those closely involved with the project, former Republic of Ireland manager Brian Kerr, said that he would be “disappointed if the IFA blocked something that had the support of the majority of the clubs”.

At least one NIFL club, Cliftonville, had effectively expressed opposition to the idea but several others were supportive and most seemed keen to see things progressed as far as possible so that they could make an informed choice on the options open to them.

Their reasons were clear; prize money in the NIFL is less than half what it is in the Airtricity League and under Lucid’s proposals the winners of a new all-island competition would receive around 20 times what Linfield got for lifting last season’s title.

While the scale of the rewards for clubs in the League of Ireland are widely acknowledged to be inadequate, however, the IFA’s chief executive Patrick Nelson suggests in his statement that the NIFL has gone “from strength to strength”.

At a time when the clubs south of the border have been busy asserting their independence from the FAI, it is possible that the IFA statement may cause some anger.

“Having listened to the proposals from Mr Lucid and his team,” it says, “we believe the best interests of our member clubs and football in Northern Ireland are better served by remaining with the club-led model established in 2013.” Clearly there are limits with regard to the extent to which the clubs are to be allowed lead.

It claims that the potential income figures quoted “are highly speculative” when Lucid and his supporters might prefer the word “ambitious” and points out that he provides no guarantees.

That last bit is clearly true and Lucid has been continuing to work on putting the financial package that he hoped would have made participation financially attractive in place.

Even if his final numbers fall some way short, however, he would surely still be confident of improving on a situation in which this year’s winners of the NIFL will receive some £5,000 less than the £45,000 that goes to the 42nd and last placed team on the Scottish four division ladder.

The IFA’s reluctance to also allow him complete that process and see whether the scheme could actually be delivered seems remarkable if viewed in solely football terms. But whatever the reaction of the clubs, its opposition is undoubtedly a blow to a project that probably needs the backing of both associations if Uefa’s support is to be successfully enlisted.