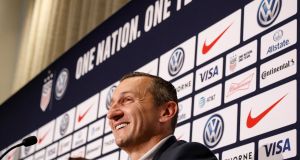 Vlatko Andonovski at a news conference to announce his appointment as the new head coach of the US women’s national soccer team in New York. Photograph: Brendan McDermid/Reuters

Just over six years have passed since FC Kansas City announced that someone called Vlatko Andonovski would be the head coach for their first season in America’s latest iteration of a women’s professional soccer league.

Most of the influential players the fledgling outfit were trying to recruit had never heard of the Macedonian and more than one prominent United States international refused to even countenance the idea of working with a man boasting no apparent pedigree. Becky Sauerbrunn was one of the only internationals to even consider the mid-Western club as an option.

During four seasons working with Andonovski, Sauerbrunn went from being a sometime starter with the US to the mainstay of the back four and, en route to winning two consecutive World Cups, became arguably the best defender in the world.

For his part in her extraordinary belated development (she was 27 when she first came under his tutelage), not to mention several seasons turning water into wine with Kansas and, more recently, Seattle Reign, Andonovski was this week announced as new head coach of the United States national team.

To the outsider looking in, it’s a risky appointment.

The 43-year-old has never coached at international level before and managing the United States is the distaff equivalent of taking over Brazil or Germany. The expectation is to win the two tournaments that matter – the Olympic Games (four golds from six tries) and the World Cup (four trophies from eight appearances). Anything less is considered a failure.

And sometimes even winning is not enough. The current squad reportedly agitated unsuccessfully for the removal of Jill Ellis (who had led them to victory in 2015) before their triumph in France last summer.

His path to the top job in women’s football was circuitous and unlikely. Born in Skopje when it was still part of the old Yugoslavia, Andonovski came from a family of footballers and played in Macedonia with FK Vardar, Makedonija GP and FK Rabotnicki before moving to America in 2000.

There, he eked out a living on the hardly lucrative, largely ignored indoor circuit with the Wichita Wings, California Cougars and Philadelphia Kixx. Eventually, he ended up coaching the Kansas City Comets and when its owners bought a franchise in the fledgling women’s outdoor league in 2012 they asked him to do a bit of double-jobbing.

Those who worked with him in the years since testify to his tactical acumen, technical expertise, eye for raw talent, and happy knack for getting on with everybody. Those were the sort of encomiums that the United States Soccer Federation heard again and again when, like a progressive county board, they consulted with their marquee players during the selection process that began in August.

Other names were in the mix (Phil Neville’s being perhaps the most risible) but it’s generally accepted a cadre of leaders in this squad effectively run the show and Andonovski was floated early on as their man.

Even if some may wonder if he’s being promoted a tad prematurely because he has the imprimatur of Megan Rapinoe (who played for him in Seattle), there are plenty who reckon his arrival is merely evidence some of these women realise that at this point in their illustrious careers they still need a coach capable of improving them.

Given that the ludicrous search for a men’s team boss last year seemed to deliberately avoid casting the net wide before settling on Gregg Berhalter, whose brother happens to be a powerful USSF executive, there seems to be sounder sporting reasons behind this choice.

Up to now, the American women have nearly always prevailed because they are reared in a hothouse atmosphere where their competitive instincts have been honed from an early age.

But there is a growing sense other nations have made up for lost time, and, in particular, are producing more technically gifted footballers playing a possession game that often makes the US’s pace and power approach look a tad outdated. With a reputation for sending out teams who win with some style, Andonovski is charged, among other things, with ensuring the most successful country becomes more aesthetically pleasing.

“If we don’t follow those trends, then all the other national teams are going to catch up to us,” said Andonovski at his introductory press conference last Monday. “But at the same time, I don’t want to just follow the trends; I want to set those trends. We want to be creative and be leaders in that.”

His first year in the job should prove interesting. Aside from needing to freshen up the squad with younger talent while placating established stars, Alex Morgan, the iconic striker, is having a baby in April but is determined to lead the line at the Olympics in July. Then there’s the small matter of a high-profile court case next May in which 28 internationals are suing the USSF for equal pay. If that’s hardly an ideal build-up to Tokyo, Andonvoski does have a lot of unique life experience to draw on.

One night in an indoor game against the Baltimore Blast, he had to jump in goal when the Kansas City Comets keeper was sent off for handball. He made two point-blank saves in the last four minutes and they held on for a crucial 8-7 victory. “Someone had to take the jersey and I volunteered,” he said. “The game was on the line.”