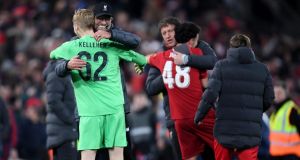 Caoimhín Kelleher of Liverpool celebrates with Jürgen Klopp after they beat Arsenal on penalties in the fourth round of the Carabao Cup. Photograph: Laurence Griffiths/Getty Images

Liverpool and the English Football League believe the impasse over the fixture congestion surrounding the club’s Carabao Cup quarter-final at Aston Villa can be resolved by moving the tie back to January 8th, though they acknowledge such a switch could have an impact on the FA Cup third round a few days earlier.

Jürgen Klopp suggested after the dramatic win against Arsenal that Liverpool might pull out of the Carabao Cup if a suitable date could not be arranged, because the original scheduling for the quarter-final clashed with Club World Cup commitments in Qatar between December 18th-21st.

Both sides accept the Villa game cannot be played on the original date but with the midweek calendar full until the end of the year the first viable opportunity is the January slot earmarked for the first leg of the Carabao Cup semi-finals.

“There are two Carabao Cup windows in January and though it will be complicated and inconvenient it ought to be possible to use those,” an EFL spokesman said. “We were actually talking to Liverpool about the possibility before their game against Arsenal and were a little surprised by the comments the manager made afterwards.”

In these circumstances Liverpool or Villa would have to play the second leg of their semi-final at some point in February.

The fixture schedule is tighter this season for two reasons. One is the winter break or free weekend in February, the other is the recent Premier League decision to bring a round of midweek matches forward to leave more space for clubs with European commitments, which has had the effect of pushing the Carabao Cup quarter-finals further back in the calendar.

The Club World Cup is not the problem; Chelsea and Manchester United competed in the Fifa event in 2012 and 2008 respectively while still involved in the League Cup and Champions League without running into the sort of fixture pile-up Liverpool are encountering. What is different this season is that the Carabao Cup quarters are closer to Christmas, as they have been for several years, and a Premier League club is involved in the Club World Cup for the first time since 2012.

Liverpool and the EFL are confident the Carabao Cup final can go ahead on March 1st as originally planned, though a complex situation will become even more tangled should Liverpool or Villa end up with an FA Cup replay to fit in after the third-round games over the first weekend in January.

Although delaying the Villa tie until January 8th is Liverpool’s preferred option, they feel a quarter-final then may overshadow the FA Cup third-round tie and influence team selection for the older competition, although that would have been the case anyway for the four teams through to the semi-finals under the original schedule. – Guardian