‘West Ham acting like ostriches with their heads in the sand’ 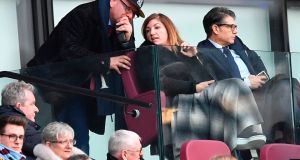 West Ham United’s vice-chairman Karren Brady during the defeat to Burnley at The London Stadium on Saturday. Photograph: Getty Images

West Ham United have been described as behaving like “ostriches with their heads in the sand” by a Labour MP in England who has written to Karren Brady demanding to know why the club have not condemned the abuse and threats aimed at the chairman of one of their supporter groups last week.

Wes Streeting, the MP for Ilford North, has contacted West Ham’s vice-chairman to ask why the board has remained silent after Mark Walker, the head of the West Ham United Independent Supporters Association (WHUISA), was left fearing for his safety after becoming the target of an online campaign orchestrated by a rival fan group, some of whose founders are former hooligans and which has links with an unrelated group condemned by anti-racism campaigners.

West Ham have repeatedly pointed out that Walker has not complained to the club about receiving abuse on Facebook from members of the Real West Ham Fans Group (RWHFG) and have insisted that there was no reason to warn Brady not to meet representatives from the group, as part of a coalition of 15 fan groups, on two occasions last month.

However the Guardian has discovered that West Ham were alerted to a prominent RWHFG figure making threats to another supporter, who wishes to remain anonymous, on Facebook three days before Brady first met the organisation on February 19th and that the club told the complainant to speak to the social networking website and the police.

Streeting, speaking about Walker, told the Guardian: “What concerns me is that mainstream elected representatives of a supporter group have been sidelined and the abuse they have been subjected to appears to not have been not taken seriously by the board. The club can’t pretend to be unaware of the fears following intimidation to fans. Instead West Ham seem to be acting like ostriches with their heads in the sand and are hiding behind bureaucracy. Karren Brady should be taking this more seriously.”

Walker was threatened after WHUISA tried to lead a protest march before Saturday’s 3-0 defeat by Burnley, a game marred by crowd trouble at the London Stadium. The RWHFG, which was set up this season by Andy Swallow and Micky Morgan, founder members of the infamous unofficial Inter City Firm, cancelled the protest after a second meeting with Brady on February 28th. WHUISA had been at both meetings. West Ham have not denied that Swallow, who has links with the controversial Football Lads Alliance, was invited to the home of David Sullivan, the club’s co-owner, a week before the first meeting.

Walker, a season-ticket holder, does not plan to attend the London Stadium again this season. His experience has prompted Streeting to write to Brady, a Conservative peer, asking whether West Ham have reassured Walker and plan to investigate and condemn the abuse.

“I was concerned to read the coverage about Mark’s treatment in the Guardian over the weekend and have subsequently spoken to him about his experiences,” Streeting wrote in a letter seen by the Guardian. “I am very troubled to hear about the threats he has received and that he has feared for his and his family’s safety

“I am disappointed that you, and other directors, appear not to have clearly condemned the online abuse and threats to Mark, which meant that he was advised not to attend Saturday’s game. I believe that the club has a particular responsibility to call out abuse and threats when you become aware of them.

“Tensions are clearly high between fans and the club’s owners and directors, reflected in the scenes over the weekend, but this should not be allowed to impact on fans like Mark.”

West Ham plan to respond to Streeting’s letter and have said Brady was not informed about warnings about the RWHFG that were communicated to their customer services team on February 16th. Although they consider it proper procedure that the anonymous supporter was told to speak to Facebook and the police, they will investigate why the information provided was not given to the board. Ginnie Dobson, West Ham’s senior partnerships manager, requested permission from the fan to view screenshots of the threats.

Seán Moran: Election fever a reminder of the GAA's fertile political soil 07:00
Navratilova apologises for breaking protocol with protest 06:50
Nike Vaporflys won’t be banned but regulations will tighten 06:39
Gordon D’Arcy: If Farrell can tap into our self-worth, we’re all on a winner 06:15
James McClean: ‘Abuse in the last few games has simmered right down’ 06:00

1 Winds of change as Ireland name a refreshed team, picked on form
2 Gordon D’Arcy: If Farrell can tap into our self-worth, we’re all on a winner
3 Who is Caelan Doris? Meet Ireland’s newest rugby star
4 Ashleigh Barty now living up to all her earlier promise
5 Nike Vaporflys won’t be banned but regulations will tighten
Real news has value SUBSCRIBE