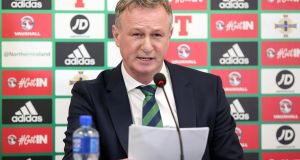 Northern Ireland manager Michael O’Neill has suggested that his Republic of Ireland counterpart, Martin, misunderstood the point that he was attempting to make in relation to the transfer of international allegiance by certain players in a recent newspaper interview.

He welcomes the prospect of the pair meeting, something he claims to have been trying to arrange since the middle of last year.

“I have been asking my counterpart at the FAI for a meeting to discuss these issues for more than eight months,” said O’Neill as he named his squad for the forthcoming friendly against South Korea in Belfast on Monday. “I am pleased that he indicated last week that he is now willing to take me up on that.

“It is clear to me that given the examples that Martin used in his press conference that he misunderstood the issues that I wish to address. I am not talking about senior players but those aged 17-21 born in Northern Ireland. “

In a prepared statement read out at the start of his press conference, O’Neill effectively reiterated his call for the FAI to leave young players already capped by Northern Ireland to develop within the IFA system but he said that he had not intended to suggest that the Republic’s association was breaking any rules in facilitating the transfer of players who opted to change their allegiance.

“Where I am critical of the FAI,” he said, “is the way in which it currently communicates with the IFA over a player who potentially wishes to make a transfer. There is no dialogue with our coaches from their respective counterparts at the FAI besides an email from the FAI’s licensing department requesting information on the player.

“The Irish FA,” he continued, “invests thousands of hours and hundreds of thousands of pounds in players in our Club NI programme. While it is a player’s right to choose to play for the Republic of Ireland at underage level, such a decision means that another young player has missed out on the opportunity to be part of our elite performance pathway and another player in the FAI system will miss out on selection.

“We appeal for transparency and fairness at underage level. We respect that young players, who represent Northern Ireland at underage level have the right to choose to play for the Republic of Ireland. What we are asking for is that such a significant decision - one that could affect their entire career - is neither influenced nor made until that player reaches senior age and is made at a time which is in the player’s best interest.”

This is, in essence, seems to be a reference to the “gentleman’s agreement,” that had been floated in the interview. Martin O’Neill, who says the two met recently at a game but that the issue was not brought up, seemed open to the notion when he spoke at his own squad announcement last week but did accept that there were practical and other problems in any attempt to limit a player’s ability to exercise his rights under Fifa regulations.

The Republic of Ireland manager had, however, hinted that he did not seek to take full advantage of the rules as they are when he said that he had been impressed by QPR’s Paul Smyth when he saw him play recently but that he would not make any approach to the 20 year-old forward as he considers him to be within the Northern Ireland camp.

Michael O’Neill said that while Smyth is currently in Northern Ireland’s Under-21 squad, he will consider bringing him on the senior squad’s end of season tour at the start of the summer.

IFA chief executive, Patrick Nelson, attended O’Neill’s press conference in Belfast but neither man would answer questions on the issue after the manager’s statement had been read out

1 Monica Seles: The warrior queen who could have been the best ever
2 Ferrari’s Charles Leclerc ‘will not take the knee’ before Austria GP
3 Matt Williams: Six Nations must recognise the desire for revolution outside Europe
4 Eamon O’Shea: We spent quite a bit of time talking about older people rather than to them
5 Serpentine stays on from the front to steal Epsom Derby for Aidan O’Brien
Real news has value SUBSCRIBE
Crossword Get access to over 6,000 interactive crosswords