Tottenham remember to be Tottenham at the wrong time 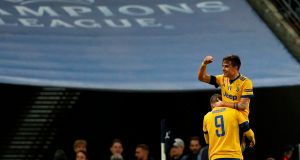 For an hour at Wembley, with the quarter-finals of the Champions League beckoning and the scalp of Juventus already partially hacked from its canary-yellow neck, Tottenham found themselves playing like a team in the process of becoming something else, of forgetting, just for an hour, to be Spurs.

It will be a crushing disappointment Mauricio Pochettino’s team failed to hold their momentum long enough to see out this tie. But it is also tribute to the pure footballing will of opponents who seemed at times on the verge of being outmuscled; to the transformative power of a match-changing foul on Dele Alli; and to the incisive brilliance of Paulo Dybala, who took his one chance to decide the tie.

Turning points always come into focus in retrospect. Even then the narrative depends on other details. Had Harry Kane’s header bounced in off the post near the end this could have been a tale of harum-scarum never-say-die victory.

Instead the turning point arrived 10 minutes after half-time, at the end of an ugly period during which Juventus reacted to Tottenham’s bruising pressure by making a conscious effort to kick their way back to physical parity.

Giorgio Chiellini will have more elegant games than this. Here he and his fellow defenders were asked to work and were given a deeply uncomfortable night.

At times in the opening 20 minutes at Wembley Kane had Chiellini if not on toast, then crammed, half-in, half-out of an open Kane sandwich as he jostled and hustled and turned with his back to goal. Chiellini stumbled, but he adjusted also and with 55 minutes gone produced a wonderful moment of calculated ugliness.

Taking the ball near the touchline Alli looked up and prepared to skip inside. As he did so Chiellini appeared, barging into Tottenham’s chief playmaker like a stuntman hurling himself shoulder first through a plate-glass window.

Alli had been a source of constant irritation in that opening hour, prancing forward with the ball at his feet, producing some audacious flicks. Outside him Son Hueng-min had been the real star, his duel with Andrea Barzagli a gripping, bruising piece of theatre.

Midway through the first half Barzagli could be seen committing an act of genuinely nasty revenge-defence. Leaping under a high ball he barged Son to the floor, then twice stamped on the Korean’s thigh as he came down.

Indeed, at times in those early moments Barzagli looked offended as much as anything else. This is a player who has entered that grizzled dotage of Italian defence, one of the age-old snarling Easter Island heads at the heart of this Juve team. And yet Son just kept yapping away at him fearlessly, head up, showing off that beautifully natural ability to turn on to both feet.

Son’s goal to put Spurs 1-0 up on the night came from Barzagli being dragged out of position, hurling himself full-length to block Alli in front of goal. And Spurs held that lead, seeming for so long in this tie to be on the verge of eliminating a European aristocrat. Right up until the moment they didn’t. Again credit must be given to that gnarled and seasoned winning know-how.

Shortly after the Alli assault Barzagli left another part of his boot on Son’s shin, but still escaped a booking. At which point, as the hour ticked round, Spurs looked down and began to wobble. Alli, in particular, faded, barely having a significant kick after his own roughing up.

It will be tempting here to see an unfavourable comparison with the slightly older Dybala, who played a similar role for Juventus to Alli, but who had the patience, and ultimately the edge, to decide this tie.

With the job of grasping this upstart Spurs team by the scruff finally under control, it seemed fitting Dybala should make the difference on a night of educated smash and grab. He is a spectacularly gifted playmaker. A couple of years back Paul Pogba revealed he calls Dybala by the nickname “Square R2”, explaining: “It’s the combination you press on PlayStation to do a turn and shot – he always scores like that.”

Steadily here he began to find space, oozing across the lime-green Wembley turf with that low, shark-like bounce. Max Allegri made some telling changes, bringing on Stephan Lichtsteiner, whose cross was headed on for Gonzalo Higuaín to score. And from there Spurs produced their own moment of anti-Juve, falling apart at just the wrong moment, a simple combination setting Dybala away into a vast open green space with no one between him and Hugo Lloris. He tiptoed closer, made an angle and finished high into the net to make it 4-3 on aggregate.

If the first half had belonged to Son, and to Tottenham’s mighty press, Chiellini’s brawn and craft and Dybala’s authentic razor edge had by the end proved too much.

‘It doesn’t bother me’ – Thomas Barr on the what ifs of Rio 07:00
Hopes of a home winner alive as Barty reaches last four 06:45
Waterford’s Bennett aware of past but looking to a better future 06:30
Owen Doyle: Breakdown of law and order in rugby must stop 06:30
All Island League meetings to hear findings of first assessment 06:30