Jose Mourinho hits back at De Boer over Rashford concern 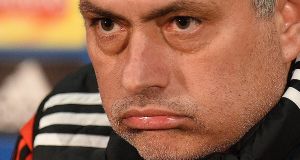 Manchester United boss Jose Mourinho has labelled Frank de Boer the ‘worst manager in the history of the Premier League’ after the Dutchman criticised his handling of young England striker Marcus Rashford.

De Boer, who lasted only 77 days as Crystal Palace manager after losing his first four league games in charge with no goals scored, said in an interview on BT Sport that it was “a pity” Mourinho was Rashford’s manager because he was not getting enough chances.

Rashford, 20, has been on the bench 15 times in the league this season but scored twice to secure a 2-1 victory over Liverpool on Saturday having been named in the starting line-up. It was his first Premier League start of 2018 and he has played less than 100 minutes so far this year, leading many to question if his development is being disrupted.

De Boer was capped 112 times by the Netherlands during an impressive playing career which included stints at Barcelona and Ajax - winning league titles with both and the Champions League with the latter. As a manager he led Ajax to four league titles in a row from 2011 to 2014.

Mourinho did not hold back when asked about De Boer’s comments during his news conference ahead of Tuesday’s Champions League last 16, second leg tie against Sevilla.

“I read something, some quote from the worst manager in the history of the Premier League, Frank de Boer saying it’s not good for Rashford to have a coach like me,” Mourinho said.

“If he was coached by Frank he would be coached how to lose because he lost every game.”

De Boer is not the only pundit to question Mourinho’s conservative approach when it comes to Rashford who is vying for a starting place alongside the likes of Romelu Lukaku, Anthony Martial and Alexis Sanchez.

But the Portuguese disputes the idea that Rashford is being held back under his charge.

“If you go to his numbers and how many games he played with me. I would say he was in the top five with more matches for two seasons,” Mourinho said.

“Marcus is having these experiences. I’m really happy too. He plays for United many matches, he starts some comes from the bench for others. Does he play every match from the start? No.

“Of course not. He’s a player we trust. Not many were expecting him to start against Liverpool and he had a good match not just about scoring goals. I’m really happy with Marcus.”

Rashford could retain his place when United take on Sevilla at Old Trafford with the tie poised at 0-0.