All in the Game: you Watt? Sanchez sent off for giving his name 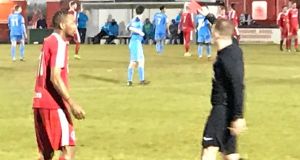 Jonathan Klinsmann started his footballing career as a striker but probably made a wise decision when he switched to being a goalie, just to save him from a lifetime of “you’re not a patch on your father” remarks. And his father is, of course, Jurgen. (Insert your “at least Jonathan is allowed to dive” gags here).

The 20-year-old, who has played for the US at under-20 level, was born in Germany but moved with his parents to California when he was just one. Last year, though, he returned to the land of his birth when he signed for Hertha Berlin, making his debut for the club in December in the Europa League when he saved a penalty in a 1-1 draw with Ostersunds.

A good start, then. How’s it gone since? Not well. He’s not even making it on to the bench for Hertha, instead fighting it out with a 19-year-old for the third goalkeeping spot. And last week the club’s goalkeeping coach Zsolt Petry explained why: “The reliable, serious and focused German way of working has not completely reached him. He still is way too American. The development of his personality has stopped. If he manages to improve, he could become an option. If not, it is going to be difficult.”

Cripes. Hertha coach Pal Dardai defended young Klinsmann and said he would have a word with Petry about the “difference between internal and external communication”. In other words, “halt die klappe”. Aka “shut up”.

There’s a more than reasonable chance that you heard what happened Sanchez Watt last week, but on the off chance that you missed the greatest sending-off story in the history of Association Football, here’s a quick recap.

Playing for Hemel Hempstead against East Thurrock in a National League South game on Wednesday, the former England youth international was booked for kicking the ball away. He told SPORTbible what happened next: “The ref ran over with the book out to give me a yellow. He asked for my name, so I said,

I said, ‘what! You can’t send me off for saying my name!’. He said, ‘off you get’. The captain ran over and said ‘his name is Watt, Sanchez Watt!’ He stood there looking lost and stupid, put the red back and gave me a yellow.”

Epic. Morto for the ref, though.

“We set up a clause which we think is enough to have Messi retire at FC Barcelona. But having said that, we thought a year ago that the clause for Neymar was also good enough to retain the player . . . things are getting a little bit crazy.”

“Thank you to my wife, who put up with me over the last two weeks, as I was a terrible pain . . . No! My girlfriend! I called her wife because I will soon be a father, so it slipped, but no, there has been no wedding.”

– Striker Gonzalo Higuain (left), so emotional after Juventus beat Spurs that he forgot he’s yet to pop the question to his other half.

“He obviously wants his summers off.”

Joey Barton on Scott McTominay’s decision to declare for Scotland rather than England. Tsk.

That’s how many cards (35 yellow, two red) Real Madrid’s Sergio Ramos has collected in the Champions League, moving one ahead of Paul Scholes in the roll of honour last week. From only 110 games too, versus Scholes’s 124. The rowdy...

The Sun has produced plenty of nifty headlines in its time and didn’t do too badly last week when Manchester City managed to lose at home to a Swiss side it had beaten 4-0 away in the first leg: Basel Faulty. (Although, admittedly, if you pronounce it Basle it doesn’t work so well). But, and it’s a big but, whoever came up with the headline for Spurs’s exit at the hands of Juventus should bow their heads in shame: ’Arryvederci.

They should be taken out the back and Kaned.

Remember the one and only Jose Luis Chilavert, Paraguay’s goalkeeper at the 1998 and 2002 World Cup finals? A useful goalie he was too, picked as the best of the lot at the 1998 finals. He also managed eight goals during his international career, often taking penalties and free-kicks for his country.

Any way, Chilavert, now 52, did some reminiscing in an interview with ESPN last week and recalled the time Germany knocked Paraguay out of the 2002 World Cup. Their star man that tournament was Michael Ballack, and Chilavert had a unique explanation for why he was so difficult to mark.

“You couldn’t get near Ballack because his BO was terrible, absolutely terrible. He should have used more deodorant or a lemon. Perhaps it was a strategy, who knows.”

If Ballack sues, it’ll be a heckuva court case.

– Gary Neville won’t be invited ’round to Paul Pogba’s any time soon.

– The legend that is Italian coach Arrigo Sacchi with his take on Paris Saint-Germain after their Champions League exit.

“There are a few luxuries that I think every man should treat himself to . . . a good pair of headphones, a beautiful watch, smelling great is a must, so every man should have a nice signature fragrance, and of course, very good quality underwear.”

– Cristiano Ronaldo on what every man needs for a happy life. (And he’ll sell you any of the above-mentioned products too).

“The first foal of the season was born last night. It’s like becoming a dad. This fired me up even more.”

– Thomas Muller explaining why he scored twice for Bayern Munich against Freiburg – there’s been the pitter-patter of tiny hooves at his wife Lisa’s stables.