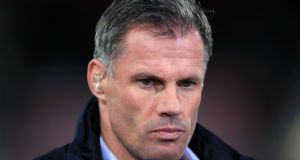 Sky are to hold talks with Jamie Carragher after he was caught on camera spitting towards a 14-year-old girl. Photograph: John Walton/PA

Former Liverpool defender Jamie Carragher has been suspended from his duties as Sky Sports analyst after the 40-year-old admitted spitting at a car with a teenage girl inside was “four or five seconds of madness”.

In a video of the incident, the 14-year-old’s father repeatedly mentioned the scoreline of Manchester United’s 2-1 victory over Liverpool on Saturday and the former player is heard to say “All right”, before appearing to spit at the car alongside his.

Carragher has apologised to the family and stressed he will try to do so again in person, but that has not prevented his employers dropping him from the Monday Night Football programme.

“Jamie Carragher has been suspended from his duties as a football analyst for Sky after he was filmed spitting at a family in their car following Liverpool’s defeat against Manchester United on Saturday,” said a statement from Sky Sports on their Twitter account.

Carragher has expressed regret both privately and publicly and admits he has no explanation for his actions.

“You can’t condone that behaviour. No matter what the circumstances, you cannot ever behave like that, it is just unacceptable,” he told Sky News.

“Watching those clips back it feels like an out-of-body thing, that moment of madness for four or five seconds.

“I have no excuse and it is devastating for the family involved and my own family — but it is my actions which have brought that on.

“My biggest regret — there are lots at what has happened — but certainly the biggest one is for a 14-year-old girl to be caught in the middle of an altercation with her father.

It was "a moment of madness" says Jamie Carragher after being filmed spitting at a fan's car after being heckled pic.twitter.com/cHxpE9v7GI

“That has devastated me more than anything. This is a bad stain on my character and my career.”

Asked what kind of message it sent out he added: “A poor message. Not just being in the game of football, it is a poor message for everyone out there.

“It is the lowest of the low. All I can do is apologise and try to get back to being the person I am.”

Carragher, who has not offered his resignation, was asked a number of times whether he thought he should keep his job.

The former Champions League winning centre-back, who became clearly emotional when speaking about his own teenage daughter, did make a case for being able to continue.

“There is no doubt what I have done is disgusting. I apologise for it and am getting vilified — and rightly so.

“I am speaking to people at Sky and working at the best way forward. They have made it be known they are very disappointed and I understand that.

“I have brought shame on the name of Sky.

“Hopefully I can show people over these next days and weeks the real me and hopefully a moment of madness will not cloud their judgment.

“What I would hope, not just for Sky, but for the public who have known me in the public eye for almost 25 years since I was playing, is five seconds of madness would not take over everything.

“All I can do now is apologise. Hopefully they accept that and I’d like to apologise again. There is not a lot I can add except improving my actions.”

“I’ve just watched Carra23 say sorry. No excuses he’s made a big mistake. He’s massively passionate about football and he’s overstepped the mark and shouldn’t have reacted,” he wrote.

“I’ve been on TV for 3 years with him and imo this isolated incident shouldn’t stop us working together.”