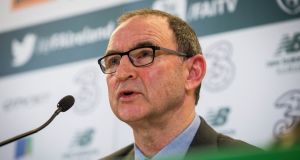 Republic of Ireland manager Martin O’Neill has said that he is “very disappointed” with “the nature of the comments” made by Michael O’Neill who suggested in a newspaper interview this week that the FAI “only ever approach one type of player (from Northern Ireland): Catholic”.

“To actually talk about religion, to bring religion into it...I think that’s something that you will have to ask Michael about,” said the Republic of Ireland boss as he named a provisional squad of 30 for the forthcoming training camp and friendly international away to Turkey.

“I played for Northern Ireland 60 odd times, was captain loads of times, probably one of the most successful periods where we had both Catholics and Protestants who played. And one of the things that we had, not only did we have a great set of players who played, from both sides of the religious divide, but we had great camaraderie.

“So I think those things have to be remembered. And yeah, I’m very disappointed about it.

O’Neill said that the two men had met by chance recently at a game at Craven Cottage and that Michael O’Neill had not raised the matter at all.

“We had a very convivial conversation,” he said. “He never mentioned these particular points. I wish he had done, privately. So it came, as I said to you, as a bit of surprise. But I’ve had a conversation with him since and he has admitted that I have not taken a single player from him; in fact, quite the opposite, he’s gone and I think he has taken Alex Bruce during my time but I’ve not taken one senior player at all.”

O’Neill said that he has “no problem having a conversation about underage,” a reference to his counterpart’s suggestion that there might be scope for some sort of “gentleman’s agreement” on one side not calling up players who have been capped by the other in their teens but this is regarded as hugely unlikely given that it would deprive players of a choice they are entitled to under Fifa rules and, in essence, under the terms of the Good Friday Agreement.

“I think the most important issue in this: One; I’ve never chosen a player on anything other than merit and two; Really, really importantly... it is down to the player; it is the player’s choice with these issues and I have always accepted that. I think that’s really it.

“The rules are there at this minute. And we have lost fellas ourselves to England. In fact there’s a young fella last night (Marcus McGuane) who made his debut for Barcelona and he played for us at under-17 and he has gone to play for England. So this is happening and we accept that. It is entirely the player’s choice. So these issues have arisen and players have a choice and we accept that.

“I’m doing the interview now, at this minute but Michael is the person that you will have to question and I’m sure that you will.”

1 Six Nations: Ireland are contenders but England still the team to beat
2 In Donegal Michael Murphy is seen, simply, as a godsend
3 Nick Kyrgios sets up Rafael Nadal showdown after five-set thriller
4 Mike Catt hopes to have Irish backs purring in Six Nations
5 Owen Doyle: Creeping professionalism of schools rugby a threat to the game
Real news has value SUBSCRIBE
Crossword Get access to over 6,000 interactive crosswords