United ‘not too far away’ from contending for title, says Solskjær 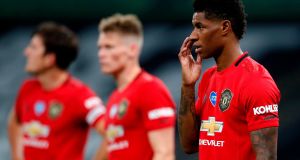 Ole Gunnar Solskjær believes Manchester United are “not too far away” from being genuine title contenders.

A 1-1 draw with Tottenham last week made it 12 unbeaten games, the best sequence since Solskjær took over in December 2018. Paul Pogba and Marcus Rashford were missing for 11 matches of that run because of injury before returning against Spurs.

United are fifth, 37 points behind Liverpool, who have turned last season’s one-point deficit to Manchester City into a 20-point advantage. Reminded of the swing, Solskjaer was asked whether his team may be only two or three high-class players away from challenging.

“City and Liverpool the last couple of seasons have put the standard where it should be to win the league,” the manager said. “We’ve developed over the season and had a spell of 11 unbeaten. [Then we] added Paul Pogba and Marcus Rashford to that and are thinking: ‘Yeah, we’re not too far away.’ I’m very happy with the squad. If there are any good deals to be made, players to make us better, of course we might have to spend some money. But the squad is great to work with and it’s moving in the right direction.

“We’re still not where we want to be, close enough to challenge for the Premier League trophy, but we take one step at a time. Hopefully we can challenge for the Europa League and FA Cup this season and the top four. Then, let’s see how much we can invest for next season. We’re getting closer and closer to the team we want to be and in the next eight [league] games we want to dominate and be tested.

“We’ve only conceded three goals in the last 12 games and are getting better and better as a team – well organised, hard to break down and we’ve always got quality to go and score goals.”

Solskjær said a decision on whether the goalkeeper Dean Henderson will go on loan again would be taken at the end of the season.

“Dean has had a fantastic couple of years at Sheffield United and I think eventually he will end up as England No 1 and Man United No 1,” the 47-year-old said. “But he’s got the best goalkeeper in the world in David De Gea [ahead of him] and for me David is still developing, still getting better.

“Definitely Dean can work in our goalkeeping department – we’ve got Sergio [Romero], we’ve got Lee [Grant] and David, three fantastically experienced, good keepers. We’re going to have to make a decision because Dean obviously needs games. We’ll have a sit down with him.” – Guardian