John Egan sent off as Newcastle swat aside Sheffield United 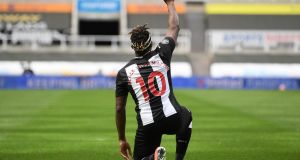 Allan Saint-Maximin ruined his rented back garden by staging dribbling contests against his dog during lockdown and Chris Wilder can only hope the French winger has not also destroyed Sheffield United’s European ambitions.

If Saint-Maximin’s landlord has cause to rue the state of that lawn, Steve Bruce can only thank Saint-Maximin after the game’s outstanding individual dragged his side to within touching distance of Premier League safety.

Admittedly Newcastle’s rise to the 38-point mark was also partly facilitated by John Egan’s 50th-minute sending off but further goals from the excellent Matt Ritchie and Joelinton sealed a performance big on efficiency and understated polish.

Bruce said he had selected his starting XI on two criteria. “We’ve picked what are, I hope, the fittest and the brightest players,” said Newcastle’s manager. He added that he “couldn’t deny” that the uncertainty prompted by the club’s seemingly stalled £300m Saudi Arabian led takeover has proved “a distraction”.

The early evidence suggested that Sheffield United – already under Saudi ownership – were sharper and more switched on . If that served to magnify Bruce’s fears that his team might be a little “under-cooked” it perhaps also reflected the home players apparent sense of initial disbelief at being surrounded by stands filled with tens of thousands of eerily empty seats.

Without the customary 52,000 fans around to raise adrenaline levels, the atmosphere was suitably flat but after Sheffield United failed to make the most of some promising looking set pieces, Saint-Maximin’s unique blend of improvisation and acceleration began ruffling Wilder’s side.

The Blades backline soon looked to be suffering from a human version of not so much canine fatigue of the sort presumably suffered by the former Nice winger’s pet as sheer bewilderment.

Miguel Almirón’s splendid counter-attacking through pass left Joelinton clean through but the misfortune in front of goal which had haunted the £40m Brazilian strikerbefore the shutdown returned with a vengeance. As he shaped to shoot, Joelinton somehow contrived to get a boot stuck in the turf and promptly fell over. Bruce says he is “a beast” in training but Joelinton had scored his one previous Premier League goal against Tottenham last August. This latest mishap occurred just as by far the first half’s best chance had landed at his feet.

Shortly afterwards John Egan seemed to tug Almirón back in the area. No penalty was awarded but Joelinton took out some of his frustration by squaring up to Egan. After a non-socially distanced bout of push and shove both players were booked.

Granted, the home defence were not quite as solid as the forbidding metal barriers barring most entrances to St James’ Park in these dystopian times but in the main they looked just as well organised as Wilder’susually efficient back three.

Wilder’s gameplan was disrupted in the 50th minute when Egan was sent off after collecting a second yellow card for grabbing Joelinton’s shirt and hauling him back as he accelerated towards goal.

The visitors were still reorganising when, five minutes later, Saint-Maximin scored. The normally reliable Enda Stevens lost concentration and misread Matt Ritchie’s cross, ended up kicking thin air and the ball was allowed to travel as far as the winger whose low shot eluded Henderson. Might the Manchester United loanee goalkeeper have done better?

After the Newcastle players had exchanged a few embraces of the sort to give Professor Chris Whitty, Sir Patrick Vallance and the rest of the government’s scientific advisers palpitations Saint-Maximin took a knee.

All that remained was for Joelinton to punch the turf in delight after being in the right place in the right time to meet Almirón’s low cross and register his first league goal at St James’ Park. – Guardian