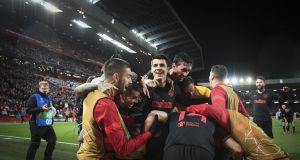 Lisbon has been selected by Uefa as the venue for a mini-tournament to conclude this season’s Champions League.

One-leg quarter- and semi-finals and the final will be played in the Portuguese capital from August 12th to 23rd. A decision will be taken by July 10th as to whether the second legs of the four unfinished last-16 ties, including those involving Manchester City and Chelsea, will be played at their normal venues or in Portugal, with Guimarães and Porto available if needed. Those matches will be played on August 7th and 8th.

Uefa said the clubs due to host second legs would prefer to play at home but health and safety considerations and quarantine arrangements would shape the decision.

Meanwhile, it was also confirmed that Dundalk will begin their qualifying campaign for next season’s Champions League on August 18th or 19th with a one-off fixture rather than the usual two legs.

Should they progress the second round will be played on August 25th and 26th, the third round on September 15th and 16th and the playoff round – which will be a two-legged affair – on September 22nd and 23rd and 29th and 30th.

Shamrock Rovers, Bohemians and Derry City will begin their Europa League campaign on August 27th in the first qualifying round with all qualifiers in that tournament to be played as one-off matches.

Women’s National League Champions Peamount United are set to begin their European campaign in the Uefa Women’s Champions League qualifying round mini-tournaments, played between October 7th and 13th. The draw for the qualifying groups will take place in the first week of September.

At Wednesday’s meeting, the executive committee of European football’s governing body confirmed Lisbon as the venue for the conclusion of this year’s Champions League. The final had been due to be played in Istanbul, which will instead get the 2021 final. Other finals have also been pushed back a year meaning St Petersburg will get 2022, Munich 2023 and Wembley 2024.

Atlético Madrid, RB Leipzig, Atalanta and Paris Saint-Germain have qualified for the last eight but half the last-16 ties were unfinished when coronavirus forced football to halt. Manchester City are due to play a second leg at home to Real Madrid, leading 2-1; Chelsea are 3-0 down from the home first leg against Bayern Munich; Juventus are due to host Lyon, who won the first leg 1-0; and Barcelona are due to play at home to Napoli at 1-1.

The last eight of the Europa League is to be held in Germany from 10-21 August across four cities: Duisburg, Gelsenkirchen, Frankfurt and Cologne.

None of the last-16 ties has been completed, with Manchester United (5-0 up from their first leg at Lask), Wolves (who drew 1-1 at Olympiakos) and Rangers (beaten 3-1 at home by Bayer Leverkusen) among the clubs in the competition. A decision on whether those games, to be held on August 5th and 6th, will be played as normal or relocated to Germany will be taken in due course.

Uefa said it would rule by mid-July whether fans will be allowed to attend any matches in Lisbon or Germany. Even if they are, it is possible only locals will be permitted to come.

The governing body also announced the Women’s Champions League last eight would be hosted in Bilbao and San Sebastián. – Guardian