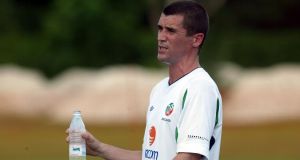 Michael Kennedy, the London-born property solicitor who came to prominence in the run up to the 2002 World Cup when he was an adviser to Roy Keane, has died.

Kennedy was a key figure in the Saipan story, working with Manchester United and the FAI on Keane’s behalf as efforts were made to get the player back into the Ireland squad. When those efforts ultimately failed, it was Kennedy who issued the statement on behalf of the midfielder announcing the news that he would not be a part of Mick McCarthy’s side in Japan.

By 2002, Kennedy, who was born in Highgate to a father from Inch in Kerry and a mother from Faha, had been involved in football for almost 30 years.

He was a senior partner with London property law firm, Herbert Reeves (now Reeves Law where he is still listed by the Law Society as working as a consultant) and had been introduced to David O’Leary by a mutual friend when the Ireland and Arsenal defender was buying a house and needed legal advice on the purchase.

Kennedy, a season ticket holder at the club, subsequently advised O’Leary on a contract renewal and the player then began recommending him to others.

Over the years that followed, he would be involved in the careers of a long list of Irish internationals including Frank Stapleton, Denis Irwin and Steve Staunton with some of the deals he did, like the one around David Connolly’s move to Feyenoord in 1997, attracting the attention of very prominent players from other countries.

In his autobiography, Niall Quinn credits Kennedy with a key role in kick-starting his career after it had stalled at Arsenal, by helping to engineer his move to Manchester City in 1990. He became known as someone who fixed problems for players, working with clubs and managers, and appeared to get on well with key figures like Alex Ferguson.

It was for his close relationship with Keane that he was best known, though. Kennedy, who is understood to have been in his 70s, advised the former Manchester United and Ireland captain on all aspects of his career, a relationship that endured into Keane’s time in club management at Sunderland.