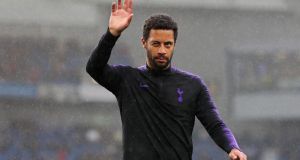 Tottenham have confirmed the £11m departure of Mousa Dembélé to Guangzhou R&F in the Chinese Super League – a player that the manager, Mauricio Pochettino, describes as a “genius” and one the club’s supporters held dear during his six-and-a-half years with them.

Dembélé, 31, has long considered China as his next destination and he thought that a deal had been agreed for him to join Beijing Guoan last summer only for nothing to materialise. This time, Spurs have been happy to take the money for a player who had six months to run on his contract, no desire to sign a new one and well-documented fitness issues.

Dembélé, who has not played since November 3rd because of a foot problem, was well aware that his body’s capacity to keep up with the remorseless demands of the Premier League was in doubt and he wanted a move to a lower-tempo league. Initally, it appeared that he would go to Beijing but, in the end, it is Guangzhou that have got the deal done.

The Belgian joined Spurs in August 2012 from Fulham for £15m and he made 250 appearances in all competitions for them, scoring 10 goals. With Dembélé, though, it was never about the numbers, rather the admiration he drew with his uncommon mixture of brute strength and velvet-soft touch. At his best, he could dictate Spurs games from central midfield and virtually all of his teammates at various times described him as the best player at the club.

“I always say to him, ‘Mousa, when I write my book, you will be one of my genius players that I have been lucky enough to meet,’” Pochettino said in March 2017.

“One was Maradona; also Ronaldinho, Okocha and Iván de la Peña – he was a genius, too – and then Mousa. We always tell Mousa that if we had taken him at 18 or 19, he would have become one of the best players in the world.”

Dembélé described Spurs as “part of my family now, 100%.” He added: “Sometimes you separate in a bad way but I don’t feel that way. I go away with an unbelievable feeling and with a certain love for the club.”

1 Rory McIlroy puts integrity ahead of glory in US PGA second round
2 Buttler and Woakes drag England from the brink to set up thrilling Pakistan win
3 Frustration for Lowry and McIlroy as Li leads at US PGA
4 From Maestro to Mister: Andrea Pirlo named new Juventus boss
5 Sene Naoupu turning mind back to rugby after health scare
Real news has value SUBSCRIBE