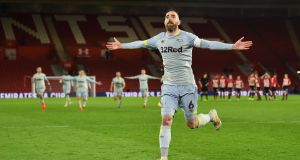 Derby County’s Richard Keogh celebrates after scoring the winning penalty in the shoot-out during the FA Cup third round replay between Southampton and Derby County at St Mary’s Stadium. Photo: Glyn Kirk/Getty Images

Marcelo Bielsa might have been able to tell everyone this before the game, but penalties were required to separate Southampton and Derby in their third round FA Cup replay. It was Frank Lampard’s side who held their nerve to go through after Nathan Redmond was the only man to miss in the shootout, the winning kick struck home by the unlikely figure of Richard Keogh.

The two sides could not be separated in 120 minutes of a broadly grim match, as like the first game Southampton took a 2-0 lead, through Stuart Armstrong and Redmond, only to be pegged back by the Liverpool loanee, Harry Wilson, and Martyn Waghorn. It was as if neither side wanted a trip to Accrington Stanley in round four.

Southampton had looked closer to scoring in the opening stages through Shane Long and a Dale Stephens header but otherwise the first 20 minutes were the definition of scrappy, summed up neatly when Cédric Soares carefully lined up a cross from the right wing, precisely picked out his target in the middle and shanked the ball into the stands.

When good bits of football did poke through the mist of mediocrity, it was Derby producing them. One delicious move involved a Matthias Sammer-esque carry out of defence from Richard Keogh, of all people, followed by a couple of flicks and backheels among the forwards, but its deserved finish didn’t arrive when Mason Mount skied his shot from the edge of the box.

Normal service was resumed a few moments later, when Martyn Waghorn contrived to be flagged offside directly after taking a short corner. Pity the poor Bielsa assistant who had to compile a dossier on this one.

But they sat up straight on 38 minutes, when Derby took the lead. Or, at least they thought they had. Tom Huddlestone slid a fine pass into the box for Waghorn, who laid it off to Craig Bryson to finish neatly. But VAR was called for and after the sort of forensic, frame-by-frame examination only previously seen by conspiracy theorists watching the Zapruder film, it was determined that the bottom half of Waghorn’s leg was offside. No goal. On the touchline Lampard laughed, and in the stands the Derby fans sang ‘F**k V-A-R!’

Was it a “clear and obvious” error? No, but at least it was something to talk about. The teams looked a little sparkier after the break, and Armstrong fired a shot just over the bar before many of those inside St Mary’s had retaken their seats, then Mount tried one of his own from an ambitious distance. Neither went in, but the effort to entertain was appreciated.

Wilson attempted to add another around the hour mark, but his powerful left-footed effort from 30 yards was just about saved by Angus Gunn, the ball dipping and swerving like a beach ball in the wind. Nathan Redmond, a half-time substitute for Saints, tried one of his own shortly afterwards, but Roos tipped it round the post.

But on 67 minutes, the deadlock was finally broken for real. Long slipped a pass to Mohamed Elyounoussi, then zipped back into the middle to receive the cross, his header was blocked on the line only for Armstrong to swoop in and nod the loose ball over the line.

Then, three minutes later, it was two. Redmond timed his run perfectly through the middle of the Derby defence,on the very edge of the defensive line – but, as VAR verified, just on the right side of it – collected Jack Stephens’s pass and delicately chipped over the advancing Roos.

Derby were given hope with 15 minutes remaining. Wilson took a free-kick from the right corner of the box, zipped into the middle at pace and it went past everyone into the corner. And before long they were level, as Wilson curled over a cross from the right and Waghorn found a pocket of space between two defenders to head into the top corner. Extra time was required, meaning the Prime Minister’s statement in Downing Street was relegated to BBC2 as BBC1 continued to show the game. It’s been a strange week.

As is usually the case, the extra 30 minutes were cagey, Tom Lawrence wasting a golden chance for Derby, while at the other end Redmond shot straight at Roos when clean through. Penalties it was.

Redmond was the first to err, shooting well wide after opening up his body and aiming for the top corner. The other eight kicks were flawless, Derby rushing to celebrate with Keogh at the end of a long night. - Guardian service