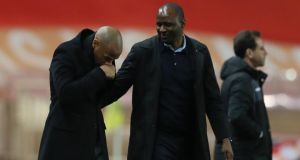 Monaco’s coach Thierry Henry and Nice’s coach Patrick Vieira react at the end of the French Ligue 1 match between Monaco and Nice at the Stade Louis II on Wednesday.Photograph: Valery Hache/AFP/Getty Images

They occupied their own intensely involved worlds for almost two hours but, when their first taste of short-term enmity was done, Thierry Henry and Patrick Vieira could look one another in the eye. A draw in this Derby de la Côte d’Azur felt about right and ensured neither manager need fret about a dented reputation just yet.

For troubled Monaco, still second from bottom in Ligue 1, the flickerings of a recovery are apparent, while Nice, who rise to sixth, continue to make steady progress 20km along the coast. It is the latest step in a heady learning curve for both, and they will each feel a potentially awkward point in their career paths has been navigated with calm.

It had all begun equably, too. Henry and Vieira strolled on to the pitch side-by-side, a few yards behind their players, looking more like convivial dog-walking companions than dear friends about to temporarily redefine the terms of their relationship. From behind a nowadays-obligatory muffling hand, Henry murmured something that drew a knowing smile from his opposite number; then dugouts were looming into view and, a hug and flurry of camera flashes later, it was time for frivolities to be put on hold.

From there on it would be primarily about the players and, for Henry, that has been an unfortunate fact since his arrival in October. The side that his predecessor, Leonardo Jardim, bequeathed him had been shorn of the tyros who won the 2016-17 league title and reached the Champions League semi-finals that year.

The difference between then and now is profound. In the centre of Monaco there is a brasserie, Monte Carlo bar, that takes its local football memorabilia with utmost seriousness – a precious thing in a place that studiously gives the impression of having better things to do. Sitting beneath the row of framed shirts from that campaign – Kylian Mbappé, Fabinho, Thomas Lemar and Bernardo Silva – feels like being in the company of football ghosts, and it is hard not to feel their presence around Stade Louis II either.

There is little secret that Henry has been having to make do. Eight of his outfielders here were 23 or below, and the balance has been all wrong. Cesc Fàbregas is among four new signings intended to correct that but, a little over two hours before the start, he could be found in the depths of this arena giving an introductory press conference rather than heeding pre-match instructions. Players who had not been signed by December 7th, the date from which this fixture was postponed, were ineligible, and the youngsters would have to be enlisted again.

The first 45 minutes presented a snapshot of Monaco’s season. Aleksandsr Golovin wasted a presentable chance and, just before the half-hour, Rony Lopes shot over. Within two minutes they were punished when Youssef Aït Bennasser’s pass was intercepted by Adrien Tameze for Allan Saint-Maximin to finish, the goal surviving a VAR review.

Nice were less fortunate in added time when the video footage persuaded Benoît Bastien, the referee, to dismiss Ihsan Sacko for what looked a bookable lunge on Benjamin Henrichs. Vieira aimed pointed words at the officials, but his side would now have a chance to conform to type. He had suggested on Tuesday that he and Henry had “a different way, maybe, of seeing the game”. The consensus was that he preferred to prioritise a solid back-line; Nice had the third-best defensive record in the division before kick-off, a fact that explains their league position more clearly than their goal tally of 14, which sat joint-bottom of the pile.

Yet they were breached within five minutes of half-time when Benoît Badiashile’s header, clawed away by Walter Benítez, was correctly ruled by the device on Bastien’s wrist to have crossed the line after a curiously lengthy delay. The sense of a turning point was even more palpable 15 minutes from time when Diego Benaglio pushed away Saint-Maximin’s penalty, which had been awarded despite constant home pressure. Radamel Falcao, a substitute, then struck a post. No winner was forthcoming but Monaco’s cause feels marginally less desperate.

They had, for all their sketchy implementation, looked like a team sent out to play with speed and ambition. “One thing about Thierry is that he is a winner, a competitor, and that’s one thing you will never be able to take away from him,” Fàbregas had said before taking his seat upstairs. “That’s why I know we are in safe hands.” Henry has always possessed the capacity to set onlookers agog; maintaining that aura in Monaco might be his greatest feat yet.

1 Ken Early: Handball ‘crisis’ a timely distraction from the grim bigger picture
2 The Offload: Springbok heavyweights heading for Pro14
3 Exeter coach Baxter calls for an end to mass Covid-19 testing in rugby
4 All Blacks facing a Christmas in quarantine
5 All in the Game: No sympathy from Bruno Fernandes
Real news has value SUBSCRIBE
Crossword Get access to over 6,000 interactive crosswords