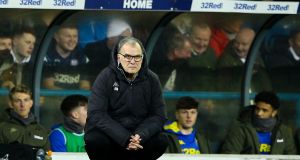 Marcelo Bielsa has admitted Leeds United have spied on all their opponents this season but remains adamant no specific rules were broken and believes he is guilty of stupidity rather than cheating.

“I observed all the rivals we played against and watched the training sessions of all opponents,” said the Leeds manager in the course of an extraordinary, unscheduled, press conference-cum-coaching masterclass at the club’s training headquarters near Wetherby.

“So why did I send someone to watch them? Just because I thought I wasn’t violating the norm. All the information I need to clarify [my tactics] I gather without watching the training session of the opponent … but we feel guilty if we don’t work enough. Watching it [the opponents training] allows us to have less anxiety and, in my case, I am stupid enough to allow this kind of behaviour.”

Perhaps the most remarkable thing about Elland Road’s “Spygate” furore is that Bielsa’s Championship leaders have been able to deploy such clandestine tactics undetected for more than half a season.

The former Argentina and Chile manager was finally prompted to address the issue last Friday when, shortly before Leeds beat Frank Lampard’s Derby County 2-0 in West Yorkshire, the Midlands club revealed that police had apprehended a suspicious person outside their training ground on Thursday. Bielsa immediately acknowledged he was a member of his backroom staff.

Although the man was released without charge, it transpired he had been equipped with wire cutters, binoculars and disguised clothing. “Cheating is a big word but this is over the line,” said Lampard, who revealed that, before Derby lost 4-1 to Leeds earlier in the season a man was spotted lurking in the bushes outside his training ground. “I’d rather not coach than send people undercover on their hands and knees in the undergrowth,” added the former England midfielder.

The Football League and Football Association responded by launching investigations but, given that there are no precise rules governing footballing espionage, it is difficult to see exactly what punishment they can impose on Leeds and Bielsa without stepping into a legal minefield. Even so, the EFL has asked Elland Road executives for their observations and, once a response is received, will decide if there has been a contravention of the League’s charter and whether to issue charges against Leeds and/or their manager.

If any charges are proven, the League – liasing closely with the FA – believe the “full range of sanctions” could potentially be applied. These range from a slap on the wrist to expulsion from the league, although no one is suggesting that the latter scenario - or a points deduction – are likely.

Nonetheless Leeds made a point of issuing a swift, formal, apology to Derby on Saturday and Bielsa has evidently deemed it politic to adopt a conciliatory tone while opting for total honesty.

“I’m going to make it easier for the EFL investigation,” said the 63-year-old Argentinian, speaking via a translator. “My behaviour is observed from the most extreme position. By doing this I respect the possible sanctions by the authorities.”

Significantly he declined to use the precedent of past incidents of football managers spying on opponents – a practice that, as recently as Friday, he maintained is the norm across South America – as a defence and appeared to accept that a certain moral ambiguity underpinned such subterfuge. “I don’t want to make it easier for me by attacking others,” he said.

“Regarding what I’ve done it is not illegal. It’s not specified, described or restrained. It’s not seen as a good thing but it is not a violation of the law. Although not illegal it’s not necessarily the right thing to do. But the wrong things you do are not done with bad intention or an intention to cheat.

In the course of the media briefing, Bielsa also treated assembled journalists to a PowerPoint presentation designed to detail how much preparation and analysis he and his staff devote to each opponent – before spies are deployed and their reports compiled.

Regardless of information received from undercover operatives, the Leeds manager spends countless hours analysing opponent’s previous matches. Citing Derby as an example, he revealed his research on the exact number of times Lampard had utilised particular formations, which players he had deployed in different positions and the identification of opposing formations they had struggled against.

If the underlying message was that Bielsa’s meticulous attention to the small print would almost certainly have helped transport Leeds to the top of the table without any spying, it probably worked. More pertinent though is the question of how lawyers will interpret his actions in relation to EFL Regulation 3.4 which states: “In all matters and transactions relating to the league each club shall behave towards each other club and the league with the utmost good faith.”

Then there is the similarly rather woolly EFL Regulation 21 which states that managers must not bring the League or any club into “disrepute.”

Bielsa’s answer attributed what had happened to cultural misunderstanding. “If you observe something without authorisation we call it spying,” he said. “I’m going to try and explain I did not have bad intentions. I did not try to get an unfair sporting advantage but I did it because it was not illegal or violating specific laws. But I have to adapt to the habits of English football.”