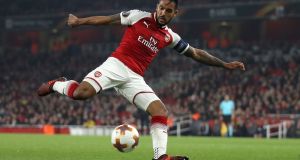 Theo Walcott has become Everton’s second signing of the transfer window after completing a move from Arsenal in a deal worth more than £20 million (€22.5 million).

The 28-year-old underwent a medical on Merseyside on Tuesday before finalising terms on a three-and-a-half-year contract at Goodison Park. Everton are understood to have matched the winger’s £110,000-a-week (€125,000) wage and met Arsenal’s demands for a player with 18 months left on his contract at the Emirates Stadium.

Walcott spent 12 years with Arsene Wenger’s side, scoring 108 goals in 397 appearances in total, but has struggled for a regular starting role in recent seasons. His last Premier League start came in a 1-0 win against Leicester City on April 26th last year.

The former England international also had an offer from former club Southampton but was swayed by the prospect of reviving his career on Merseyside under Sam Allardyce. Walcott knows Everton’s management team from England duty, notably assistant manager Sammy Lee, and also worked with Allardyce, first-team coach Craig Shakespeare and goalkeeping coach Martyn Margetson when the 63-year-old took charge of his one game with the national team.

He is the second new arrival at Everton this month following Cenk Tosun’s move from Besiktas for an initial £21 million (€23.75 million). – Guardian service