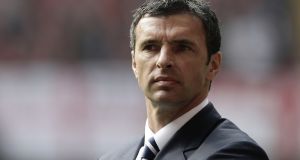 A court in Liverpool at the trial of football coach Barry Bennell heard that Gary Speed (pictured above) is one of four players that were coached by Bennell to take their own lives. Photograph: Ian Kington/AFP/Getty Images

Gary Speed was one of four players from Barry Bennell’s junior football teams who killed themselves later in life after being coached by the man now charged with multiple sex offences against young footballers, the jury at Bennell’s trial was told.

Speed, the former Wales manager, hanged himself in November 2011, at the age of 42. One man whom Bennell admitted abusing in 1998 told the court he knew of other boys from the same teams who had been left destitute, suicidal and addicted to drugs or alcohol.

Describing how his own ordeal still haunted him, Bennell’s victim told Liverpool crown court he was “sick to death” of it still being in his life; he told the jury he had wanted to get in touch with Speed’s parents because he had read in the media that they had not been able to get closure as there was no explanation for their son’s death.

His evidence came on the same day another of Bennell’s victims told the court he believed two key members of staff from Manchester City, including the chief scout Ken Barnes, knew he had been molested but did nothing about it.

The former player, now in his 40s, said he believed Barnes was aware of what Bennell was doing but had not taken any action to stop a man who was later convicted of child-sex offences in England and the US.

The same complainant also named Mike Grimsley, formerly a youth-team coach at Manchester City, as someone he suspected had known that Bennell was abusing him during a four-year ordeal in the 1980s. The victim was aged 11 to 15 at the time and alleges there were more than 100 occasions when he was forced to perform sex acts on Bennell, who the prosecution describe as a “devious paedophile.” The victim, described by his witness as being “one of Barry’s favourites”, told the jury he wanted the club to accept they were culpable. “I want an apology off Manchester City.”

Barnes died in 2010, aged 81, and had a long association with City, including an 11-year stint as a player, appearing in the 1955 and 1956 FA Cup finals. His family has previously told the Guardian he did not know at the time about Bennell abusing boys.

Grimsley, who coached boys aged 14 and older at Manchester City, was approached by the Guardian in November 2016 and said he did not know about Bennell’s crimes, saying he was “shocked by it all”.

Now 64, Bennell has admitted one charge relating to the latest former Manchester City player to give evidence – the fifth in the opening six days of the trial – but pleaded not guilty to six other counts involving the same person, including attempted buggery. In total, he has pleaded guilty to seven charges involving three boys but denied 48 counts of sexual offences against 11 alleged victims, from 1979 to 1991.

According to the latest man to give evidence, Bennell had “hundreds of boys” passing through his home. The first impressions, he said, were that Bennell was “very charismatic, probably the best footballer I’d seen in terms of skills. He’d got all the gear (designer sportswear), everyone was in awe of him and he’d got all the connections – so all very positive.”

Bennell, he said, used to take him to watch Manchester City play at their old Maine Road ground and also bought him gifts as well as regular cinema and theatre trips. The boy was “pretty much living with him”, staying virtually every weekend, but was abused on the first occasion he stayed overnight with him.

According to the former player’s evidence, Bennell would even abuse him while he was driving, on trips to Spain, at the Butlin’s holiday camp in Pwllheli and at what he described as “a dilapidated house in Wales”. On one occasion he recalled being at Bennell’s house when a police car pulled up outside. “I was upstairs. I can remember the knock at the door. He looked out of the window, saw the marked police car and I can remember him saying: ‘Stay up here.’”

Cross-examined by the defence barrister, Eleanor Laws, the man was asked if he had rung the NSPCC line that was set up after Andy Woodward’s interview with the Guardian about being another of Bennell’s victims. He was asked if he had alleged on that call that Crewe Alexandra and Dario Gradi, their former manager, had known about the abuse. The man said he did not recall making any call of that nature. Gradi, who is currently suspended by the Football Association, has always denied any wrongdoing. – Guardian service