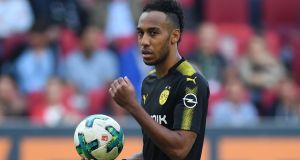 Dortmund’s Pierre-Emerick Aubameyang: it appears he has burned his bridges in Dortmund. Photograph: AFP Photo/Christof Stache

Arsenal are increasingly confident of securing Borussia Dortmund striker Pierre-Emerick Aubameyang after holding productive talks with the Bundesliga club as they prepare for life after Alexis Sanchez.

The London club expect to lose the Chilean international this week – with Manchester United his likeliest destination ahead of Manchester City – as they edge closer to concluding a deal for young Brazilian forward Malcom from Bordeaux for around £40 million. Yet with Theo Walcott also set to leave the Emirates stadium this month, most likely for Everton, Arsenal have turned their attentions to adding Aubameyang to their ranks as well.

The Gabon international has been prolific in Germany, with 141 goals in 212 appearances, despite off-field issues in Dortmund, and his qualities and potential availability have been impressed upon the Arsenal hierarchy by the club’s new head of recruitment Sven Mislintat, who had been instrumental in bringing Aubameyang to the Bundesliga in 2013.

Borussia are prepared to sell the 28-year-old, who was omitted from the first-team squad for last weekend’s goalless draw against Wolfsburg for disciplinary reasons after apparently missing a team meeting, but could seek as much as €60 million (£53.3m) for the striker.

Negotiations over a fee are ongoing but while Arsene Wenger may need convincing that a player who has had his issues off the pitch will truly soften the blow of Sanchez’s departure, Mislintat’s input could prove key.

The German is credited with bringing the likes of Robert Lewandowski and Ousmane Dembele to Dortmund, where he had worked as chief scout, and has recommended Aubameyang together with another former Borussia player Henrikh Mkhitaryan to his new club. The Armenian international may be involved in part-exchange in any deal which takes Sanchez to United.

Arsenal may need Dortmund to secure a replacement for Aubameyang before the forward’s sale is sanctioned, and the German club could yet test the Premier League side’s resolve to retain Olivier Giroud. Yet where Arsenal had previously been led to believe the Gabon forward would not be interested in a move to the Emirates stadium, there is hope now that he will be more open to a switch to England.

Certainly it appears he has burned his bridges in Dortmund, with Borussia’s general manager Michael Zorc having grown impatient with the player’s indiscipline off the pitch.

“What is going on now is not to be tolerated by the club,” he said over the weekend. “It is clear: it cannot go on like this. I don’t know what is going through his mind. I don’t recognise him anymore. There is trouble in the team, and that is not good.”

Aubameyang is understood to have met with Borussia’s hierarchy on Sunday at the club’s training ground.

Meanwhile, Mauricio Pochettino has allowed Marcus Edwards to join Norwich City on loan for the rest of the season. A host of clubs declared their interest in the 19-year-old Tottenham Hotspur attacking midfielder, and Norwich were selected as the preferred option.

Edwards, who made his Tottenham debut as a substitute in the League Cup against Gillingham in September 2016, has been unable to force himself back into first-team contention this season.

Pochettino has come to accept that Edwards is at a stage of his development where he needs to experience regular senior football, and he decided a loan to the Championship was the ideal short-term solution.

The manager continues to see a pathway at Tottenham for Edwards, who is so talented that he has acquired the nickname “Mini Messi” at the club. He was a part of the England squad that won the European Under-19 Championship last July.

Norwich have secured Edwards after selling Alex Pritchard to Huddersfield Town. Edwards is ineligible for Wednesday’s FA Cup tie at Chelsea because he was not registered in time.