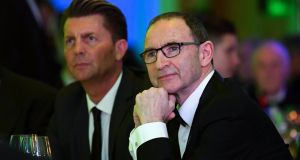 John Delaney says that Martin O’Neill will sign his new contract as Republic of Ireland manager within the week and the FAI’s chief executive is confident, he maintains, that the 65 year-old will see the team through to the end of the European Championship qualifying campaign.

He has suggested, however, the association simply accepts that if the former Leicester City and Sunderland boss wants to return to club management at some point then there will be nothing really that can be done to stand in his way.

“Our view is he has done a very good job for us,” said Delaney at an event to announce the news that Aviva has taken up the first of its two options to extend its initial 10 year naming rights of Lansdowne Road by five years. “He has got us to the play-offs twice, qualified us once, round of 16 obviously in France, narrowly beaten by France.

“So he took some time and he confirmed to me on Sunday after he spoke to Stoke that he wanted to stay with the Republic of Ireland. He came in last night and he agreed terms. His representatives will meet with our lawyers on Monday and he agreed with me that the contract would be signed prior to the Nations League draw.”

Delaney insisted that he had always been optimistic that O’Neill would stay on but confirmed that the northerner has phoned him on Saturday to say that he was to have talks with representatives of the Premier League club. O’Neill called again on Sunday, he says, to inform him that he had declined the job.

“When he rang me on Saturday to say he was meeting Stoke, on balance I have to say my view was he was going to be ringing on Sunday to say he would stay with the Republic of Ireland. He rang me Sunday afternoon to say he had respectively declined the Stoke offer. And he’s had other offers as well. He’ll outline those to you.”

O’Neill is due to speak to the media at next Wednesday’s Nations League draw in Lausanne.

The association, Delaney insisted, would have been entitled to compensation had O’Neill departed but the reality is that it could not prevent its manager leaving if that’s what he decides he wants to do. There is no clause in his contract specifically allowing O’Neill to speak with Premier league clubs but there is, Delaney said, “an understanding” that these things will happen.

“There have been many other approaches to Martin during his time since he has joined us as Ireland manager; we have always had a very open relationship with him as manager, a very honest relationship and if any approaches are made he will inform us.

“If an employee wants to leave an employer you can’t stand in their way,” he says. “It’s like a footballer; if a player wants to leave Liverpool and go to Barcelona then they will go. Martin O’Neill, had he wanted to manage Stoke City or other clubs, could have done so by now, but he’s doesn’t want to, he wants to manage the Republic of Ireland and he made that clear last Sunday evening and last night as well.

“The bottom end for us is that the manger is going to sign his contract next week and he is going to manage us into the next campaign; that’s the bottom end of it, that’s what is going to happen so let’s get on with a younger squad, as he has indicated last night, and the development of Irish football.

1 BBC to show four live Premier League games as restart set for June 17th
2 Philip Browne admits funding model for Irish rugby is not sustainable
3 Dave Hannigan: Trump gets the clubs back out as death toll keeps rising
4 October dates being considered for Irish Open at Mount Juliet
5 Sonia O’Sullivan: How to keep your competitive edge from going blunt
Real news has value SUBSCRIBE
Crossword Get access to over 6,000 interactive crosswords