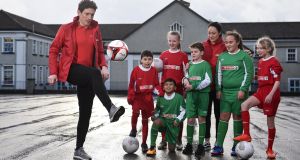 That was the way former Ireland international Keith Andrews reacted to the 2018 World Cup playoff defeat to Denmark back in October.

But the Sky Sports pundit still believes that Martin O’Neill is the man to lead Ireland forward, despite the ‘will he stay or will he go’ saga that has played out over the last few days.

O’Neill – who in October verbally agreed to remain as the national team manager but, as of now three months later, has still not signed a contract – was heavily linked with the vacant Stoke City post before reportedly turning it down as Paul Lambert was installed as Mark Hughes’ successor.

With the 65-year-old not technically under contract he was free to speak to who he pleased but the rumours and lack of clarity will have left the players feeling disappointed, said Andrews.

“I think privately they’ll be disappointed that the contract issue wasn’t sorted and we’ve heard of the Everton one and more substantially with Stoke party, there was a lot of interest from both parties, I’d presume,” Andrews said at the launch of the Spar FAI Primary Schools 5s Programme where he was making a return to his old primary school, Scoil Mhuire CBS.

“I’d be disappointed if I was a player if this unfolded for my manager, reading snippets, not really getting anything back from the manager. Having said that, by the time March comes around and contracts are signed, players being players will just get on with things because you’ve no other alternative.”

On Tuesday night O'Neill addressed the contract question when he spoke in public for the first time since the Denmark defeat in a short interview on the FAI Twitter account.

"That's been resolved. John and I agreed terms and it's just a matter now of the lawyers looking over some sort of detail and getting it signed up," O'Neill said.

March signals the next time the Ireland squad will be together, for a friendly against Turkey, before another friendly in May against France gives way to a year of tough sells for the FAI with only the new Uefa Nations League papering over the barren period before the Euro 2020 qualifiers begin in March 2019.

While the FAI have some questions to answer regarding the reason why they have, for a second time, essentially allowed the manager of the senior international side to become a free agent for a number of months, Andrews says that the players will also need reassurance as to his commitment.

“They [O’Neill and the FAI] obviously have a level of trust between them, so that’s fine. We had it the last time, think it was three months before the contract was actually signed, so there’s a level of trust between Martin and the organisation. That’s fine on paper. It’s more disappointing in terms that it got to the level where he was being constantly being linked to it [other jobs].

“I’m thinking if I’m a player in that squad and we’re getting over the disappointment of losing to Denmark, I’d like my manager to be fully committed, and fully focused on us, as a nation, and bringing us forward. There’s certainly been a lot uncertainty in last week so I’m thinking ‘I’m not too happy about that’, if I’m a player.”

For now, although the formal contract is still yet to be signed, O’Neill is set to continue as Ireland manager for the foreseeable future with the Euro 2020 qualifying campaign of particular importance given the fact that Dublin will host four games in the tournament which is being held across 12 different European cities.

And despite his criticism after the 5-1 loss to Denmark – which Andrews says he does not regret – he thinks that the FAI are correct to keep their faith in O’Neill and not look at a new management option, despite the fact that it would seem to be a good time for a new candidate to come in with 14 months to build towards a first qualifying game.

“I think Martin should be manager of Ireland. I’ll make that clear. We are certainly going through transition. We need clarity. We need Martin to be here for next two, four years ... Who are your alternatives? It’s not as clear-cut as that. What you’ve got at the moment is a management team that knows the staff inside out, the structures, the players, their strengths, more importantly their weaknesses, I would suggest.

“What’s the next current coming in? We do criticise the style sometimes and we have this picture of someone else coming in and playing a better style of football. I keep going back to it – Martin’s reign has been very, very good. So with this pool of players and what’s coming behind it, I have faith that he will get us to the next European Championships.”

1 America at Large: Golfers guilty of legitimising Trump’s toxic regime
2 Sam Bennett stripped of a second stage win at this year’s Vuelta a España
3 Sonia O’Sullivan: Nothing normal about days spent under strict hotel quarantine
4 Arsenal’s three-goal blitz enough to see off Dundalk
5 Gaël Fickou’s switch to wing a nod to what France expect from Ireland
Real news has value SUBSCRIBE
Crossword Get access to over 6,000 interactive crosswords