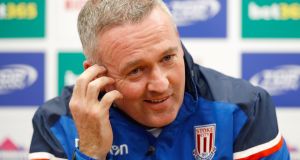 Paul Lambert has stressed it did not matter to him if he was “15th or 50th choice” to become Stoke’s new manager as he expressed his delight at landing the job.

The Potters on Monday announced Lambert’s appointment as successor to the sacked Mark Hughes on a two-and-a-half year contract.

Stoke, currently 18th in the Premier League, had been interested in Gary Rowett before he signed a new contract at Derby, and subsequently targeted Espanyol boss Quique Sanchez Flores and Republic of Ireland manager Martin O’Neill, both of whom removed themselves from the running.

Those names were mentioned to Lambert at a press conference at the bet365 Stadium on Tuesday, and the Scot said: “Whether I was 15th or 50th choice, it didn’t matter to me one bit, because it is a fantastic football club.

“I’ve had the top people trust me that I can do it, and I’m looking forward to it.

“I’m absolutely delighted that they chose me and that I’m working under them.”

Former Norwich and Aston Villa boss Lambert has not managed in the top flight since being sacked by the latter in 2015, having spells since then in charge of Blackburn and then Wolves in the Championship.

And he admitted: “I never thought I would get the chance again to come back in to this level, unless you took a team from the Championship back up, just the way the game is going.

“I’m honoured and privileged to be here and I can’t wait to get started.”

While there may have been fans underwhelmed by the appointment, ‘Paul Lambert’s Barmy Army’ was heard being chanted by Stoke supporters on Monday evening at Old Trafford, where the 48-year-old watched the 3-0 loss to Manchester United from the stands.

Asked about that on Tuesday, Lambert – whose first game in charge is Saturday’s home clash with Huddersfield – said with a smile: “I started it!

“It was great. They will come here on Saturday and get right behind the team, I know they will.

“It’s up to me to get a team on the pitch that gives them something.”

Stoke, one point adrift of 17th-placed Southampton, have lost six of their last eight league games and conceded 50 league goals this term.

Lambert is “100 per cent” confident they have what it takes to stay up, feeling they have “more than enough” to do so and “should not be in the position they are in”.

But he added: “You have to earn the right to stay in this league, and we have to start that on Saturday.”

Lambert also said he had already spoken to the Stoke hierarchy about potential transfer dealings this month, that he would be bringing in Stuart Taylor – who worked with him at Wolves – on the coaching staff, and that he would be talking to Eddie Niedzwiecki, the first-team coach who was in the dugout on Monday, about his future.

Lambert was also asked about Bojan Krkic and talk of the playmaker, on a season-long loan at Alaves, possibly coming back this month.

Lambert said he was yet to speak to Bojan and added: “I know how big a talent he is. That is a conversation for later.”