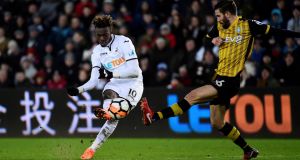 (Swansea City reached the FA Cup quarter-finals with a 2-0 win over second-tier Sheffield Wednesday on Tuesday as second-half goals from Jordan Ayew and Nathan Dyer settled an attritional fifth round replay.

Swansea, who face a last-eight tie against either Tottenham Hotspur or Rochdale, who play at Wembley on Wednesday, had been lifeless in front of a sparse crowd at the Liberty Stadium until Ayew tapped home a rebound from close range in the 55th minute.

Dyer then settled the contest against his manager Carlos Carvalhal’s former club with 10 minutes remaining, slipping the ball through ‘keeper Cameron Dawson’s legs after being played in by Tammy Abraham.

Swansea, battling to avoid relegation from the Premier League, were poor in the first half and would have fallen behind if it were not for two smart saves in quick succession by Kristoffer Nordfeldt from Wednesday striker Jordan Rhodes. Nevertheless they progress, after a win that’ll give the whole club a boost in its battle for Premier League League safety.

1 Monica Seles: The warrior queen who could have been the best ever
2 The Best of Times: Ireland’s Golden Generation make Grand Slam history in 2009
3 Welcome to Iten in Kenya – home of champions and cheats
4 World Athletics freezes out Russian athletes after $5m fine goes unpaid
5 Martina Navratilova: A leader in her time, and for ours
Real news has value SUBSCRIBE