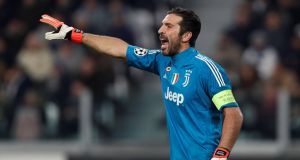 Gianluigi Buffon: comes across as an engaging figure in the Netflix series ‘First Team’ – which chronicles a season in the life of the famous Italian club. Photograph: Paul Childs/Reuters

The year when Being Liverpool, dreamed up as the Premier League’s answer to The Only Way Is Essex and other reality TV shows, made its debut on Channel 5 already seems evocative of a more innocent time in the game.

The show promised a tantalising glimpse of the mysterious and private world of one of the most famous football clubs in the world – at least for their pre-season tour of America.

So Fox Soccer viewers got to see Jon Jo Shelvey on the golf course and Luis Suarez rambling earnestly about family. They were treated to Brendan Rodgers dressing down Raheem Sterling for giving him lip on the training field: “You say “steady” to me again when I say something to you and you’ll be on the first plane home”.

The reaction was mixed.

For some, the documentary represented the end days of civilisation. Former Liverpool great Mark Lawrenson dismissed it as “American schmaltz” and said Bill Shankley would have turned in his grave at the thought that it had all come to this. Others, though, just wished they could have had the cameras there some ten years earlier when Razor Ruddock and Stan Collymore were on the rampage. Now that would have been worth catching.

Lawrenson’s frustration was understandable. The distraction of a documentary crew seemed like further evidence that the club was not fully engaged with what had seemed like its first and foremost winter duty back when he was redefining central defending with his lounge-lizard brilliance: competing for and winning the bloody league.

It turns out, though, that the show was just ahead of its time.

Now, First Team, a season-in-the-life of Juventus has just been released on Netflix and is a concerted attempt by the aristocrats of the Italian game to raise their profile internationally. It is also an attempt to extend Juve’s financial potential beyond its domestic fan base and make it an alternative for Asian and American fans in thrall to the big Premier League clubs.

Juve haven’t won the European Cup since 1996 – although they have been runners-up a whopping five times since then, including last May. But Serie A, once the connoisseurs’ league, has been eclipsed by the scale of the rivalry of Spanish football’s big two and by the cascades of money and television deals which have transformed English football.

They can’t emulate Manchester City in forking out £200 million to put together a new back line. Showcasing the club on Netflix is an attempt to present the old values of the club neatly repackaged in the entertainment obsession of the age: drama packaged in a box set and instantly consumable. It’s handsomely photographed, with plenty of slow-mo shots of the players looking moody and deep as they move through airport lounges, as if they have somehow become absorbed into a never ending TV advert for cologne.

Gianluigi Buffon and Miralem Pjanic are two of the most frequently used players and its easy to see why; they wear their reputations lightly, are aware of their blessings, are conscientious and not without humour.

The football action is high-gloss and cinematic and makes the notoriously cagey Italian game look as action packed as a Jason Bourne movie. It gives the public a taste of what it has always craved: a sense of the show behind the show.

The origin of the idea goes back to an older medium, books. In 1984, the Washington Post’s John Feinstein was expecting a big fat no when he approached Bob Knight, then a fearsome virtuoso at Indiana’s basketball programme with the idea of living with the team for a season. To everyone’s astonishment he was given free rein and spent six months just observing every practice, loss, fight, tantrum and absurdity which defined the atmosphere in a highly pressurised nationally famous sports programme.

He wrote A Season On The Brink, a vivid and unvarnished account of what turned out to be a turbulent season for Indiana (they would win the national title a year later). In short, he wrote a book that changed everything.

Four years later, HG Bissinger spent a year in Odessa, Texas and wrote Friday Night Lights, which begot the television series and the movie and a genre: the behind the scenes confessional.

In fact, A Season On the Brink itself became a movie, with Brian Dennehy giving it gusto as the quick-to-rage Knight. It’s the illusion of complete access – of being with there with the players – into which First Team taps. But because it is so glossily presented and so clearly controlled, the audience knows that it is seeing only what the Juventus custodians wants it to see.

Despite its best efforts, it is little more than a beautifully packed advertisement for the club. There is none of the emotional complexity that informs any dressing room; the competing egos, the relationship between coach and players, the pressure to perform, the doubts that come with loss of form or with injury, the cruelty of being dropped, the desire to meet the expectation of the fans, to somehow emulate Juve’s illustrious predecessors – many of whom are still regular attenders at games. Perhaps the players would have been willing to risk a more authentic glimpse inside their lives but those in charge of marketing the club were not.

The ironic thing was that the real melodrama of the football week was taking place in Manchester, England, with the ongoing deterioration in the professional relationship between Jose Mourinho and Paul Pogba.

Ever since he first arrived in England, Mourinho has remained a figure of unrivalled fascination, his every decision and utterance analysed by media and public alike. Charming, huffy, temperamental, assured, conniving, arrogant, inconsistent and impatient, Mourinho has always been loath to ever come across as merely ordinary or, most grievous of all, as dull.

His ongoing battle of wills with Pogba, United’s fabulously expensive signing, is basically a dressing-room feud that is now being played out before an audience of millions. After Wednesday night’s stifling 0-0 draw away to Seville, Mourinho feigned annoyance and even boredom when he was bombarded with questions about his decision not to start the Frenchman in the game. The answers, of course, were directed at the camera but the replies were for the player himself.

Pogba’s failure – or inability – to adhere to the basic defensive housekeeping that Mourinho had in mind for him is threatening to jeopardise his future at the club. It’s an unfair battle, of course. Mourinho, as manager, has most of the power, not to mention the life experience. He is 55, Pogba just 24. But it all makes for just the kind of gripping sports drama and gossip that sucks in viewers from across the world – the kind that can’t be manufactured in carefully sculpted documentaries.

1 Betting shops face uncertain future as they prepare for Monday reopening
2 Tianna Bartoletta: ‘After you’ve gotten your medal, you become black in America again’
3 Mature Ringrose keeping the ups and downs of rugby life in perspective
4 The Irish Times shutdown sports quiz: Part three
5 Ian O’Riordan: An education in race and running during college days in America
Real news has value SUBSCRIBE
Crossword Get access to over 6,000 interactive crosswords