Michael Walker: Clubs and managers at the mercy of random events 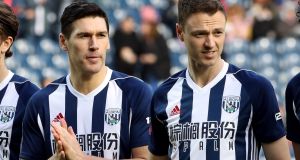 Gareth Barry and Jonny Evans: two of the four West Brom players that nicked a taxi at five in the morning outside a McDonald’s in Spain. Photograph: Nick Potts/PA

Something old, something new, something random – such as four experienced West Brom players nicking a taxi in Barcelona at five in the morning at a McDonald’s – something true.

In our sane moments we like to consider the game is the same. We like to think that matches, seasons, trophies are determined by what has occurred on the training pitch, that clubs have a realistic approach borne of experience and have policies carried out by composed personnel. Supporters hope and trust those running matters have an overriding sense of the club and a direction of travel.

When we think like this we think of well-run clubs such as Burnley and Bournemouth. Not long ago, we thought the same of West Bromwich Albion.

And then the mist descends. Be it red, blue, green or in stripes, suddenly our perception is upended by a late tackle, a missed offside. We remember that the reality of professional football is that players get drunk in Spain, that some forget to mark at corners and that the application of logic borders on illogical.

How many seasons at how many clubs are the conclusion of carefully framed ideas?

As unlikely as it seems, West Brom may avoid relegation from the Premier League – they have two points more than Leicester City did at the equivalent stage in their great escape – and where would the Barcelona taxi fit into the methodology of the season?

It wouldn’t because it was unplanned. It makes the West Brom players concerned and their manager, Alan Pardew, look foolish.

Yet they are not alone, there are enough examples of curious venues, strange behaviour and mere chance shaping the outcome of more than one season.

Go back to Spain in May 1980: Peter Shilton tells a story of Nottingham Forest’s preparations for the European Cup final in Madrid. Like the Barcelona taxi, it too involves traffic.

When, days before the final at the Bernabeu against Hamburg, Shilton informed his manager Brian Clough that the training pitch was concrete-hard and was affecting his practise, Clough responded that the world’s most expensive goalkeeper had not been looking hard enough for somewhere else to go shot-stopping.

Clough said he and his assistant Peter Taylor had found one perfect location. So Shilton followed Taylor to the edge of the small town where Forest were based.

“There you go,” Taylor said to Shilton, “there’s your grassed area.”

Shilton did a double-take.

“I couldn’t believe what he was pointing at,” he said. “Clough and Taylor never believed in pampering their players and I certainly wasn’t an exception: we were standing in front of a roundabout. On it was a circle of grass.

“I got the practice for the European Cup final against a background noise of tooting horns from passing cars.”

Shilton kept a clean sheet in the final, as Clough probably mentioned.

A different taxi story from Graeme Souness also reveals how sliding-doors choices, often unknown, can shape clubs’ futures. In April 2003 Souness was acting as a chauffeur for the super-agent Pini Zahavi. Souness was at Manchester airport collecting a friend of Zahavi’s called Roman Abramovich, an unknown Russian businessman considering buying an English football club. Abramovich was off to watch Manchester United versus Real Madrid in the Champions League.

“Roman sat in the front seat and there were three other people in the back,” Souness has recalled. “He didn’t know who I was. I tried to talk to him but I got this distinct vibe from him and the message was: ‘You just get on with the driving.’”

Abramovich had already looked at clubs in Italy and Spain. Folklore has it that his helicopter then flew over Stamford Bridge and he said: “What’s that?”

In fact Abramovich had commissioned an investment bank to assess United, Chelsea and Tottenham, plus two other unnamed English clubs. Two months after Old Trafford, he bought Chelsea and the cash-rich Roman empire changed the face of English and European football. Maybe if he’d known who Souness was it might have been different.

Alex Ferguson already knew about near misses – and hits. It is remarkable to return to Roy Keane’s transfer from Forest to United in 1993.

Keane had agreed to join Blackburn Rovers and had shaken hands on the deal with manager Kenny Dalglish. It was on a Friday afternoon in May, presumably around 5pm. The latter detail is significant because, according to Keane, “when Dalglish phoned Ewood Park, the office staff had left for the weekend”.

Dalglish told Keane not to worry, the contract could be signed on the Monday. “I went home to Cork for the weekend.”

Via Sidetrax disco and a kebab shop, Keane woke up on Sunday morning with a hangover and Ferguson on the family phone.

“Have you signed any forms?” Ferguson asked. When Keane said ‘no’, there was an invitation to Manchester for a game of snooker.

After 11 long years, Spurs finally had the chance to finish above Arsenal once again and in doing so qualify for the Champions League. It was the last day of the season and all Tottenham had to do was equal Arsenal’s result. A win at West Ham would guarantee this for Spurs and as they checked into the Canary Wharf Marriott Hotel the night before, manager Martin Jol was buoyant.

Then a lot of his players had the lasagna and a few hours later began falling ill. The next morning Spurs asked if they could postpone the game. There was no chance. So they played, and lost, while Arsenal won.

Jol was crestfallen. What had this outcome got to do with coaching or planning or a season-long strategy? It would be another 11 years before Tottenham finished above Arsenal. The food at a buffet at a London hotel had played a role in the trajectory of two clubs.

Alan Pardew, will, doubtless, shake his head quizzically at the memory of this and other episodes that prove for better, though often for worse, the dramatic effect of a random intervention. The best laid schemes of mice and men and all that.

Pardew just happened to be the West Ham manager that lasagna day. He must think of what the buffet did to Jol’s career and wonder if the Barcelona taxi rides ends with West Brom in the Championship, what it will do to his.

1 Gerry Thornley: Ireland don’t want to box themselves into a corner
2 Kevin McStay: Maybe a knockout All-Ireland Championship is the long-term solution?
3 Owen Doyle: Ireland suffered from officiating of the breakdown
4 Thomas Galligan and Cavan raring to meet Dublin in Croke Park
5 Eddie Brennan steps down as Laois hurling manager
Real news has value SUBSCRIBE
Crossword Get access to over 6,000 interactive crosswords