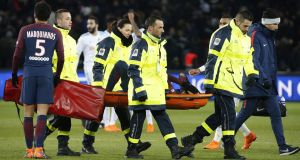 The Ligue 1 leaders did not say how long the 26-year-old would be sidelined for but he is now a major doubt for the second leg of his side’s Champions League round-of-16 tie with Real Madrid on March 6th.

Neymar, who joined PSG for a world-record transfer fee last year, left the field in tears on a stretcher during Sunday night’s Ligue 1 win over rivals Marseille.

He posted a picture on Instagram on Monday morning showing his right ankle strapped and with a protective splint, with the caption “08:10 Finished for today”.

And his club released a statement on Monday night confirming he had suffered a “fissure of the fifth metatarsal” and a “sprain of the right ankle”.

PSG boss Unai Emery had hoped to be able to count on the Brazilian when his team attempt to overturn a 3-1 first-leg deficit against the Champions League holders.

He said in his post-match press conference: “If today I had to say yes or no to be fit against Real, I want to say ‘yes’. I want to be optimistic.”

Before facing Real, PSG face Marseille once more in Wednesday’s Coupe de France quarter-final and Troyes in the league on Saturday.

The capital club lead the league standings by 14 points after winning 3-0 on Sunday night, with Neymar setting up a fine third goal for strike partner Edinson Cavani.

Real coach Zinedine Zidane is taking no pleasure from the news of Neymar’s injury.

The Frenchman, quoted by L’Equipe, said: “I don’t like it when a player hurts himself, I am not happy about the injury to Neymar. We never rejoice when a rival is absent due to injury.”