Meanwhile, Huddersfield heaped more misery on West Brom while Burnley had to settle for a draw 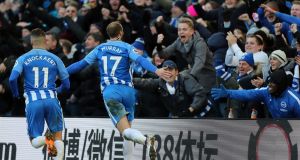 Brighton & Hove Albion’s Glenn Murray celebrates scoring the second goal for his side during their Premier League win over Swansea City at the AMEX Stadium, Brighton. Photo: Gareth Fuller/PA Wire

Glenn Murray scored twice as Brighton gave their survival hopes a shot in the arm and brought Swansea’s revival to a halt.

Murray’s double and goals from Anthony Knockaert and Jurgen Locadia helped secure a 4-1 victory and a valuable three points for the hosts, as the Swans’ 10-game unbeaten run in all competitions came to an end.

The World Cup may be a pipe dream for 34-year-old Murray, but he now has 10 Premier League goals this season and only three Englishmen — Harry Kane, Raheem Stirling and Jamie Vardy — have scored more.

Brighton have been in decent form, unbeaten in their last five outings, but they still need points on the board sooner rather than later with a daunting run-in which sees them face Tottenham, Manchester United and Liverpool in their final four matches.

Dan Gosling struck a dramatic late equaliser against his former club as Bournemouth battled back from two goals down to draw 2-2 with Newcastle.

Midfielder Gosling converted into the roof of the net in the 89th minute after Cherries substitute Adam Smith set up a tense final 10 minutes by halving the deficit.

Magpies striker Dwight Gayle looked to have earned the visitors three precious Premier League points on the south coast with two simple, first-half finishes, but they made to pay for their profligacy, which included Jonjo Shelvey missing an open goal at 2-0.

Victory at the Vitality Stadium would have moved Newcastle level on points with their hosts, but Rafael Benitez’s men will continue to look anxiously over their shoulders at the bottom three following their late capitulation.

Southampton moved their heads just above the Premier League’s bottom three after Manolo Gabbiadini grabbed a late equaliser in a 1-1 draw at Burnley on Saturday.

Burnley looked set to end a 10-match winless run in the league after Ashley Barnes headed them into the lead in the second half but Southampton dug out a crucial point.

Time was almost up at Turf Moor when Gabbiadini popped up in the area to turn home Guido Carrillo’s header back across goal.

Southampton, who have managed one win in their last 15 league games, have 27 points but edged above Swansea City and Crystal Palace on goal difference.

Rock-bottom West Brom’s troubles continued as they were beaten 2-1 at home by Premier League relegation rivals Huddersfield, their fifth successive loss in all competitions.

Strikes from Rajiv van La Parra in the 48th minute and Steve Mounie in the 56th put Huddersfield 2-0 up.

Craig Dawson replied with a header in the 64th, but West Brom could not muster anything further as the pressure increased on boss Alan Pardew.

In a contest where Albion fans made their frustration heard in various ways, there were chants of “you’re getting sacked in the morning” directed at Pardew towards the end, and loud boos rang around The Hawthorns at the final whistle.

The result leaves the Baggies — who have won just one of 14 league games under Pardew — still seven points adrift of the safety, with 10 matches left to play.

Huddersfield, meanwhile, are up three places to 14th, and are three points clear of the drop zone.