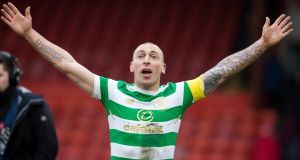 Brown broke the news to the new national team boss over the weekend as he confessed he was struggling to cope with the rigours of balancing his club commitments and leading out the Scots.

The Celtic skipper bows out having represented his country 55 times since making his debut against the United States in 2005.

McLeish handed the 32-year-old his first competitive start against Italy in Bari two years later but he will now be denied the chance to reunite with the midfield battler as he begins his second reign following Brown’s announcement that he is hanging up his international boots.

While disappointed, the Scotland boss — who was only re-appointed to the Hampden hotseat 10 days ago — fully understands his reasoning.

“I would like to thank Scott for his dedication to his country throughout his career,” said McLeish in a statement.

“I have known Scott for a long time — I gave him his first competitive Scotland cap — and I know how difficult this decision has been for him.

“Scott gave his all every time he represented his nation and his influence on the squad is immeasurable — he led by example both on and off the pitch and set the tone amongst the squad.

“He has been a shining example for the younger players in the squad and an influential figure in the dressing room.”

“I think he means it this time,” Rodgers said of Brown. “It is obviously great news for Celtic and sad for the Scottish team.

“I think the last time he went back it was probably for Gordon, to help someone he was very close to.

“But for him and his career going forward, he wants to prolong his career at club level and, with the amount of games we have at club level, taking away international football, it is a real, real sensible decision.”