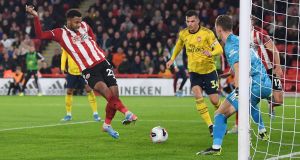 Lys Mousset marked his first league start for Sheffield United by scoring the goal that sent them into the top half of the table and intensified doubts about Arsenal’s direction of travel. Unai Emery’s side would have vaulted to third in the table with a win here but never looked worthy of that perch. Chris Wilder’s men were more coherent and clinical.

United went into this game on the back of three straight losses at home but Unai Emery is too well informed to have been misled by that record: the Arsenal manager knew his team would need to show steel in Sheffield. The question was whether he could find the formula to produce it from a squad who have been maddeningly brittle on the road for several years.

On their travels this season before this game they had mixed encouraging spells with the same old flakiness, losing only once – at Anfield – but failing to convince even when taking points. They were fortunate, for instance, to escape with a draw last month at Watford, where they crumbled after taking a two-goal lead. That raised familiar questions about their quality and character.

For more than one reason the Blades looked forward to taking a swing at these visitors.

Surprisingly Emery decided this was not the time to give a first league start to Kieran Tierney even though the left-back has recovered from the injury from which he was suffering when Arsenal signed him from Celtic last summer. Instead Tierney began on the bench. Héctor Bellerín was not even deemed fit enough for that.

In the absence of the club’s first-choice full-backs, Calum Chambers continued on the right and Sead Kolasinac on the left. Alexandre Lacazette was among the substitutes for the first time since injuring an ankle six weeks ago. But, as so often, Emery decided Arsenal would be better off without Mesut Özil.

Mousset, the striker signed from Bournemouth for £10m in July, was partnered by David McGoldrick, fit again after a month out with a groin injury. Oli McBurnie, goalless in his last five league starts, was named among the substitutes three days after his arrest on suspicion of drink driving.

The hosts started like they owned the place but their early pressure won only a series of corners, which Arsenal defended well.

The visitors were the first to create a real opening, Chambers releasing Pépé with a pass down the tight before the Ivorian sent over a low cross that eluded Pierre-Emerick Aubameyang by inches.

A fair contest was brewing, with both sides well organised and working hard off the ball – progress, as far as Arsenal were concerned, even if creativity was in short supply.

United unlocked the visitors with a lovely bit of interplay in the 20th minute. McGoldrick and John Fleck combed before the intrepid Enda Stevens drilled the ball into the danger zone but Mousset could not adjust his feet quickly enough to flick it into the net from six yards. Pépé was guilty of a far worse miss moments later, swatting wide from close range after a sweeping counter-attack and a low cross from Kolasinac.

Then, to no one’s surprise, Arsenal’s apparent solidity was exposed as an illusion. United’s fifth corner of the game brought the breakthrough. Mattéo Guendouzi got lost under Ollie Norwood’s delivery, Jack O’Connell headed the ball back across goal and Mousset slotted home from three yards.

Arsenal tried to fight back immediately but were rumbled for simulation, Bukayo Sako booked for falling in the box as John Egan closed in. The Arsenal coach Freddie Ljungberg also saw yellow for giving lip from the sidelines.

Arsenal forced United backwards for the remainder of the first half but the hosts defended well. The only save Henderson had to make was from a shot from 25 yards by Granit Xhaka.

Emery tried to adapt his formula for the second half, replacing Joe Willock with Dani Ceballos. Arsenal came out full of determination to equalise and had plenty of the ball but could not prise open the hosts. It was hard not to think that Özil would have been a useful option at a time like this. One wondered whether Aubemeyang was having similar thoughts as he waited in vain for a pass he could use. Or perhaps he was meditating on the purpose of Pépé, whose performance here offered few clues.

Ceballos was the first Arsenal player to get a sight of goal in the second half but failed to make a clean connection from 10 yards after a deft cross by Sako. Henderson saved without fuss. Then Fleck twice went close at the other end with powerful shots from distance.

Emery cast on Lacazette for Xhaka for the last 20 minutes. But vigilant United fended him off, too. – Guardian