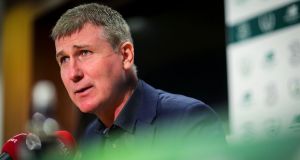 Stephen Kenny has expressed frustration over the travel arrangements his under-21 side will have to endure when they play a vital European Championship qualifier in Armenia next week but admits that the current financial situation at the FAI means the squad will simply have to deal with the journey as best they can.

Ireland currently lead their qualification group although their three real rivals – Iceland, Italy and Sweden – all have games in hand and Kenny’s side need to win in Yerevan then get a positive result back at home against the Swedes five days later if they are to recover momentum lost last month when they were beaten in Reykjavik.

The squad, though, must fly to Armenia for next Thursday’s game through London then Kiev before returning to Dublin for their second game five days later via Moscow.

Irish underage sides normally travel on scheduled flights but Kenny sounded like a man who would have argued for making an exception if things were not quite so bleak on the financial front out in Abbotstown right now.

“I’m used to going direct,” said Kenny at the press conference where he named his squad for the two games. “With Dundalk, we’d have always chartered a flight. But I do understand the way it is; that’s where we are, resources are very tight in the association at the moment. We’re reminded of that consistently. That sort of stuff would pay for an awful lot of stuff, through all the teams, for one flight; if you know what I mean?

“At under-21 level, that would blow your budget for the year, that’s the reality of it. But it’s not good preparation getting three flights and two back to play Sweden, it’s not good at all.”

Kenny is also without six of the players who featured prominently in the win away over Sweden with starters Darragh Leahy and Jonathan Afolabi injured, Lee O’Connor and Jayson Molumby suspended for the away fixture and Aaron Connolly having been promoted to the senior squad.

Troy Parrott, who came off the bench to score twice in Kalmar, is also with Mick McCarthy’s squad for the moment and while he might yet be released back to the under-21s after the friendly against New Zealand, Kenny says there is no arrangement for that to happen.

He has, he insists however, no complaints at all about any of his players pushing on to bigger things.

“Troy is very good because he will finds pockets of space in between defenders,” he says. “Aaron Connolly can adapt to any situation. So they are a loss but listen, it’s great.

“Troy’s first two internationals at under-21 level, he scored three goals, which is a terrific return, and he helped us to get six points against Armenia and Sweden. We were terrifically happy to have him while we did, his attitude for us has been brilliant, but it is ultimately about players progressing and so I’m absolutely delighted for him.”

“Aaron could be part of the senior team qualifying for the European Championships and that is the bigger win really, a bigger win for Ireland.

“And that is the job. You have to try and expand your player pool and there are some players coming in now and getting their chance.”

On this occasion, Jack Clarke, Aidan Keena and Thomas O’Connor, all 20, and playing at Aston Villa, Hearts and Gillingham (on loan from Southampton) respectively have received their first call-ups at this level and Kenny suggested that with so many players ruled out there will be opportunities.

“Some players will make their debuts,” he said, “and we will need a big performance if we are to get the victory.”