Bayern Munich beginning to find their name alone is not enough 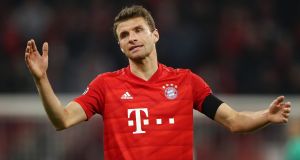 Earlier this year, representatives of one of the Bundesliga’s budding superstars met with a delegation from Bayern Munich. Their client is likely to move to a bigger club at the end of the current season, and Bayern, the German champions, are one of a half-dozen potential suitors. But first, his agents wanted to discover what plans the club’s hierarchy had for their player.

The tone of the meeting was cordial — Bayern pride themselves on their hospitality, their clubby atmosphere — but it was not, from the agents’ point of view, especially productive.

Bayern did not offer a detailed pitch, a clear blueprint, of how a career might develop under its care. Instead, their officials simply gave the impression that it was inevitable the player should move to Bavaria. Surely it was obvious, after all, that he was by nature “a Bayern player.”

For a long time, that was all Bayern needed to do. They did not have to sell themselves to prospective targets, especially those from its nominal rivals in the Bundesliga. The pitch was the interest; ordinarily, the mere fact that Bayern wanted a player — combined with its massively superior financial strength — was flattery enough to get a deal done.

It worked when Bayern decided they wanted Schalke’s Manuel Neuer and Leon Goretzka. It worked when they moved to sign Hoffenheim’s Sebastian Rudy and Niklas Süle. It worked, again and again, whenever they set their sights on the crown jewels of their fiercest rival, Borussia Dortmund: Mats Hummels, Robert Lewandowski, Mario Götze.

That was the Bayern model, and it was one that dealt a double blow to any team aspiring to challengetheir hegemony: Every time Bayern took a player from a putative rival, they not only strengthened themselves, becoming a sort of Bundesliga All-Stars, but weakened an opponent. The model worked, too: Bayern have been champion of Germany every year since 2013.

Just when the club needs it most, though, it has ground to a halt. These are, by the standards of Bayern Munich in the 21st century, troubled times. They sit fourth in the Bundesliga, four points adrift of the surprise leader, Borussia Mönchengladbach. While they defeated Olympiacos in the Champions League on Wednesday, clinching a 12th straight trip to the knockout stage of the competition, they have won only five of 10 league games this season.

It was not a surprise to anyone when they parted ways with their coach, Niko Kovac, after last weekend’s 5-1 defeat to Eintracht Frankfurt, not even to him: Kovac offered to resign at a meeting after the game. It is the second time in three years Bayern has fired a manager before Germany’s winter break. At least Kovac made it to November. In 2017, Carlo Ancelotti did not get past October.

That is just the start of it. Later this month, Uli Hoeness, the mastermind behind Bayern’s rise to superpower status, will leave his role as club president. It will be the first time in four decades that Hoeness has not been the dominant figure behind the scenes at Säbener Strasse, the club’s headquarters in a sleepy suburb to the south of Munich.

On the field, many of the stalwarts of the last decade or so have departed: Hummels returned to Dortmund and Franck Ribéry left for Fiorentina. Arjen Robben has retired his one, very effective trick. Others might have left, too. Bayern made it plain they would welcome interest in the central defender Jérôme Boateng last summer; even Thomas Müller, a lifelong fan of the club, has exhibited the occasional sign of restlessness.

Bayern’s transfer strategy last summer suggested they had, at last, recognised the need for change. They spent hundreds of millions of dollars on the likes of Lucas Hernandez and Benjamin Pavard; they tried to recruit Chelsea’s Callum Hudson-Odoi and Manchester City’s Leroy Sané, too.

What has happened since, though, illustrates that the job is nowhere near finished. Bayern expect to win the Bundesliga — both Kovac and Ancelotti did so, and found it counted for nothing when their futures were weighed — and with good reason: The club remain a financial juggernaut, generating $385 million (€347m) a year in commercial revenue, a figure bettered globally only by Real Madrid.

Bayern pay their players far more than any domestic rival. According to Uefa’s annual benchmarking report, Bayern’s annual salary commitments are the fifth highest in Europe: $30m (€275m) a year, more than $100m (€90m) higher than Dortmund, their closest contender in the Bundesliga. Winning in Germany should be a given. It is in Europe that Bayern gauges its strength.

The problem is that Bayern are finding that all of their money and power do not go quite as far as they used to, certainly not in Germany. Bayern no longer can assume they are the natural destination for promising domestic players; there are, invariably, English teams circling, too, able to match or better the salary on offer in Munich, increasingly convinced that German soccer is the perfect proving ground for aspiring Premier League players.

The interest of British clubs suits the rest of the Bundesliga rather better than the traditional talent drain south: not only do Premier League teams pay handsomely, and upfront, they do not also return at least once a season to take three points home, too.

Given the choice between Munich and England, one European sporting director said, he would sell a player to England every time. The pattern is reversing: Where once Bayern raided the Bundesliga to maintain strength at an opponents’ expense, now continental rivals are using the same resource to grow stronger at Bayern’s.

Bayern will, in the coming weeks, appoint not only a new manager — perhaps even Arsène Wenger, on a short-term basis — but crown a new president, too. But that is not the extent of the change the club requires. It is just the start of the process, the administrative detail.

For a decade, perhaps more, Bayern Munich has been the most stable of the superclubs: certain of their identity, confident of their place in European soccer’s hierarchy and perhaps even complacent at the very summit of the Bundesliga. All of a sudden, the world has shifted around them. Much of that has disappeared. For the first time in a long time, simply being Bayern Munich is no longer enough. - NYT