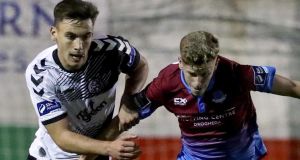 Brighton have completed the signing of Republic of Ireland under-19 international Warren O’Hora from Bohemians.

The 18-year-old defender has agreed a two-and-a-half-year contract with the Premier League side for an undisclosed fee and will initially join the club’s under-23 squad.

O’Hora’s move follows a successful trial period with Albion at the end of 2017.

Brighton’s under-23 coach Simon Rusk told the club’s official website: “We’re pleased to secure the services of Warren after he impressed during a couple of training sessions before Christmas.

“He’s had some good experience playing in Ireland’s Premier Division last season and he’ll certainly add to the competition we already have in central defence.

“We’re delighted to welcome him to the club and are keen to contribute towards his continued development as a footballer.”

O’Hora, Brighton’s first signing of the transfer widow, came through the academy system at Bohemians and played 11 times for the first team.

He has also represented his country at youth level, most recently playing for Ireland’s Under-19s in their European Championship qualifier against Cyprus in October.

1 David Clifford sends everyone back to their corners unbeaten
2 Six Nations: A 21st-century tournament that saw Irish rugby come of age
3 Mike Catt hopes to have Irish backs purring in Six Nations
4 Ashleigh Barty now living up to all her earlier promise
5 Six Nations: Ireland are contenders but England still the team to beat
Real news has value SUBSCRIBE